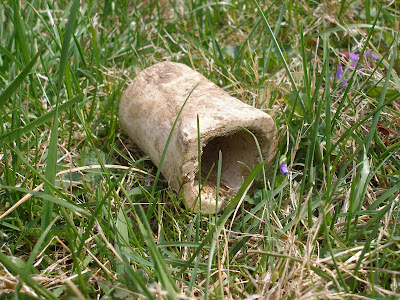 I was in Berrytown recently taking pics for a new book project, when I came across a freakin' bone laying in the grass at the cemetery.

Considering that in recent weeks and months people have found skulls and fetuses left in Kentucky cemeteries, and that vandalism and that grave-robbing are on the rise, I was naturally suspicious. 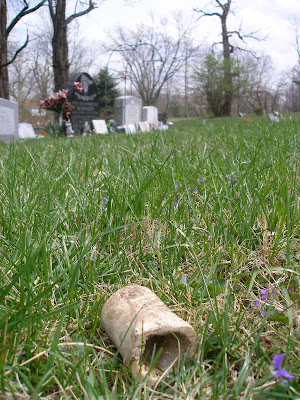 Probably just a pork neckbone or something. How'd it get here? Good question.

Then again, it is covered in dirt, as if it had been buried and dug up.

On the other hand, it could be a stewbone buried by a dog, as dogs are wont to do, and subsequently dug up for gnawing on later.

I think I'll go eat some pie now and not think about it.
Posted by JSH at 8:59 PM

You should report it to the police for shits and giggles.

Could be another type of bone dug up by dogs. I used to live near a graveyard, and there was at least once that one of dogs brought in a mysterious looking bone from somewhere.

It does look like the stew bones I used to give my pups. It would freak me out finding it in a cemetary like that....but I guess Dogs aren't too particular about where they bury their treasures!

Looks like one of those bones you can get at Petsmart...odd placement though...