The Airports of Madison County 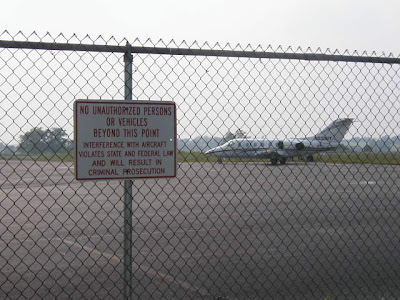 Okay, so we here at Unusual Kentucky are admittedly given to paranoid and conspiratorial conjecture at the drop of a hat. But the Madison County Airport really does give us the Creeps. It's tucked back in the woods far, far, far from civilization and there are almost no signs pointing how to get there from the main road. There is a real feeling of uneasiness out here, and everyone here seems very paranoid and wary of outsiders. (It's been this way for years, incidentally - long before the Sept.11th incident made all airports a little more tense) Though airnav.com lists the military as accounting for only 3 percent of their traffic, we've seen an awful lot of military planes in and out of here at times. The airport, it should be noted, is not far from Blue Grass Army Depot, who of course have extensive airport and helipad facilities of their own. 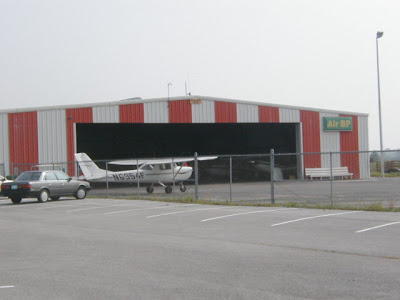 On Menelaus Road, on the way to the Madison Airport, there is yet another airport, apparently called "The Berea/Richmond Airport" according to one map. Never seen planes come or go here but the planes parked in the weed-filled field change from time to time so evidently they do get some traffic. It's a tiny field next to a barn and farmhouse, with a small half-hangar towards the back. 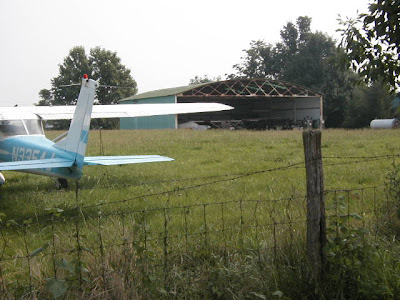 And while you're out in this neck of the woods, also check out the Hanging Bridge.
Posted by JSH at 11:46 PM

My dad used to enjoy flying planes out of those airports. I had my one and only flying lesson out of the little airport with the grass field. I remember my dad taking me to eat at Bananas that day as well. Bananas used to be one of my favorite places to eat in Richmond back when I had money in my pockets. Alligator is awesome and I miss being able to see all the college girls that used to work there.


"I'm just sitting here watching the wheels go round and round. I really love to watch them go."

There used to be an airport known as Lackeys airport. It may be the one you describe with the grass field. At one time you could skydive there for around $50.

I have seen a massive amount of chemtrails in the Richmond skies. Even though my friend who lives there does not believe there's anything to it and thinks they were passenger planes, passenger planes do not make hundreds of long-lasting trails of white smoke all over the sky. The sky was cloudless, but became very cloudy after the criss-crossing planes left their marks all over the sky. The planes could very well have originated from one of these Madison County airports. What is the reason for chemtrails?

The Berea/Richmond Airport "used" to be very active and once owned by Sam Lackey. My mother, Mary Lee Cundiff-Coffey used to be married to Sam and lived in the house that adjoins the small airport and adjacent farm. Sam died back in the 1960s but was an avid aviator. The Lackey family has since sold the farm and airport and I understand a developer is now building a neighborhood on the old airport grounds.
My mother once told me of a dream she had about a plane crash at the airport. Her dream became reality one day when a piolot indeed crashed at the small airport, killing him instantly.

The Madison County airport is uncontrolled and doesn't have any control towers, which makes it appear as if there is little activity. But if, in fact, you were to go there, you'd see at least half a dozen aircraft parked out on the ramp. The EKU Aviation program operates out of there, so it gets enough traffic.

I used to work at the Richmond/Madison Co. airport about 2 years ago when it was sold to Air 51 of BlueGrass airport. It is a small but active airport with around 10-20 flights a day, some of which are military opps. They stop in for gas and a pee break on their trainign missions. The rest of he flights are local pilots. There are over 40 aircraft on the field all locally owned. EKU does their training there now so its become very buisy. Anyone can stop buy and come into the office for a chat and even take a ride if you want. Very friendly folks there now. Free rides are given to children twice a year there too! The "Berea/Richmond" airport AKA Lacky's used to be a fun place to fly from with quite a few planes there and sky diving and some aerobatics. It was a short grass strip but after old man Lacky died the property was sold and is now a corn field, saddly. Many ocal pilots have very fond memories of that old airport.