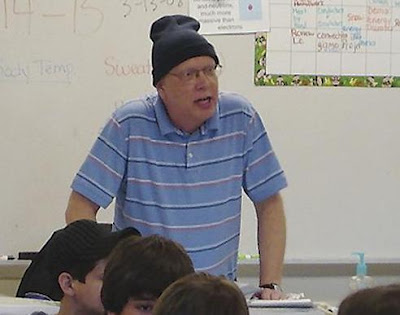 The official verdict is in: Bill Sparkman, the census worker recently found dead in Clay County with the word "fed" written across his chest, killed himself and staged it to look like homicide so his son could collect the insurance money. Or so the Kentucky State Police believe.

According to State Police Capt. Lisa Rudzinski, Sparkman's wrists were bound loosely in front of his body, allowing considerable mobility. Duct tape held his glasses in place, and his mouth was taped shut and stuffed with a rag.

Curiously, Rudzinski said Sparkman was not blindfolded, despite previous eyewitness accounts to the contrary. Even odder to me, now they're saying he actually wasn't in Hoskins Cemetery as originally stated from day one. Now they're saying he was actually in a clearing nearby.

"No defensive wounds were located on his body," Rudzinski said. "And a rag was found in his pants that was consistent with other rags scattered at the scene, including the rag that was in his mouth. The victim's clothes were found undisturbed in the bed of his pickup truck, which was also recovered at the scene." Rudzinski also reported that the autopsy indicated that the letters spelling "Fed" were written from the bottom up, as someone might do when writing on themselves.

From the official KSP report:

The investigation indicates that Mr. Sparkman died of asphyxiation/strangulation at the same location where he was discovered in Clay County, Ky.

Despite the fact that Mr. Sparkman was found hands, feet and mouth bound with duct tape, rope around his neck and the word "FED" written on his chest, analysis of the evidence determined Mr. Sparkman's death was self-inflicted. A thorough examination of evidence from the scene, to include DNA testing, as well as examination of his vehicle and his residence resulted in the determination that Mr. Sparkman, alone, handled the key pieces of evidence with no indications of any other persons involved.

Witness statements, which are deemed credible, indicate Mr. Sparkman discussed ending his own life and these discussions matched details discovered during the course of the investigation. It was learned that Mr. Sparkman had discussed recent federal investigations and the perceived negative attitudes toward federal entities by some residents of Clay County.

Without raising any red flag of conspiracy theory, let me just say that I'm inclined to think there's a little more to the story than we are being told. Just because no one's DNA was found at the crime scene is meaningless - criminals do wear gloves and stuff in this forensically conscious age, you know. And the whole "letters written from the bottom up" thing makes no sense to me. I stood in front of a mirror, imagining "What would Sparkman do?" and my first impulse was to start the letters at the top, not the bottom.

Finally, I'm puzzled that they claim to have "witness statements" (plural) in which Sparkman divulged his whole secret plan to others before carrying it out. That doesn't make a whole lot of sense. In fact, if this was a suicide staged as murder, it's a really, really, really stupidly done one. And from all accounts, Sparkman was a very smart man.

Yeah, the "witness statements" part had me smirking. If these witnesses, who were conveniently "deemed credible" (in case anyone wanted to cry foul), actually were told by Sparkman what he was going to do, why keep their identities under wraps? According to this article, his own friends knew nothing of his intentions and considered him anything but suicidal.

I don't know. Just seems like the classic "we've got credible evidence, but it's classified" routine. Do these witnesses even exist?

I still don't believe it. I think the more likely scenario is that he was killed by someone that was a relative to someone working in the Clay County Courthouse.