The Testicles of Black Bess 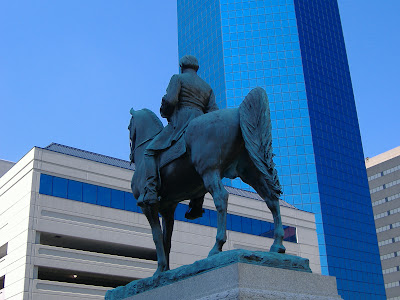 John Hunt Morgan (he of the Hunt-Morgan House) is honored for his Civil War service with an ostentatious statue in downtown Lexington (Which is rather odd, since he fought for the Confederacy). Created by Italian sculptor Pompeo Coppini, it depicts the General atop his beloved horse, Black Bess.

As you might surmise from her name, Black Bess was female. Yet Coppini, for reasons opaque to me, declared that it would be more heroic if Morgan was astride a stallion instead of a mare - and so took the extreme artistic license of giving Black Bess prominent testicles.

James Loewen, in his book Lies Across America, wrote about the quaint tradition among UK frat-boys to paint Black Bess' testicles blue and white, and relayed an old, clunkily-written anonymous poem passed along as local folklore:

So darkness comes to Bluegrass men —
Like darkness o'er them falls —
For well we know gentlemen should show
Respect for a lady's balls. 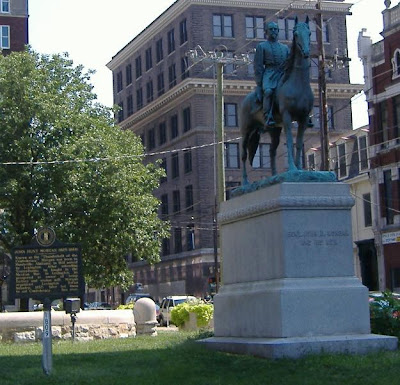 Black Bess was probably named after the English highwayman Dick Turpin's horse, even though some say that Black Bess was strictly fictional, invented for William Harrison Ainsworth's novel 1834 Rookwood and pulp fiction like Black Bess or the Knight of the Road, published in 254 weekly installments beginning in 1867.
Posted by JSH at 12:00 AM

My grandfather has told me stories of he balls being painted pink.

I remember a bull statue whose balls were always being painted pink by local kids. Weird.

During the Civil War KY was divided. In genealogical research you can actually see brothers where brothers fought on opposite sides. Not old wives tales.
At the capital bldg. after you enter you will see a statue of Abraham Lincoln and a statue of Jefferson Davis. Interesting.