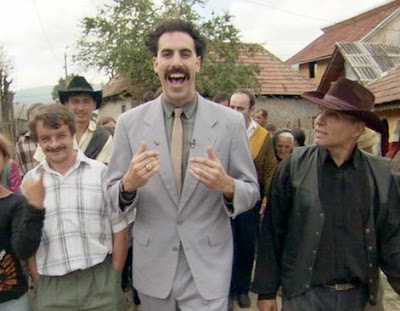 Nowadays, when someone says "High Five!", there's a very good chance they're making a Borat reference. But it wasn't always so. According to louisville.com:

"It will forever be recorded in etymology books that the late University of Louisville basketball player Derek Smith popularized, if not coined, the term "high five" during the Cards 1979-80 championship season. Whereas the gesture itself started decades before, the origin of the phrase — says none other than the Oxford English Dictionary — took hold in 1980 and found its first print use in an October 1980 issue of Maclean’s Magazine. Smith, it should be noted, did take credit for inventing the language."

Sure enough, a glance at Smith's findagrave page declares him the creator and the originator of the term "high five" not once but twice in the same short paragraph. (Turn to page 209 in your copy of Weird Kentucky for a closer look at Smith's larger-than-life full-body-pictorial gravestone.)

Problem is, there are many sites online, like Outsports, that name baseball star Glenn Burke as the creator of the High Five.

And then there's a site called National High Five Day which says:

"I received an email two weeks ago. It came from Victor Sleets, a resident of Eminence, Kentucky. Mr. Sleets had been introduced to National High Five Day by a friend who thought that based on his unique family history, he might be interested in the holiday. I spoke in detail to Mr. Sleets and his father Lamont on the phone, and based on what they told me about their family’s history, I have no doubt that the true history of the High Five can finally be revealed.

Victor’s father, Lamont Sleets Jr, known to his friends as Mont, is one of the greatest basketball players in Murray State University’s history. Twice named to the Ohio Valley All-Conference team, Mont’s true legacy has not been recognized until now: Mont Sleets invented the High Five as we know it today."

Wow, so maybe the High Five was invented in Kentucky after all? As Borat would also say: "Not!"

The National High Five Day page gives an explanation for Sleets' creation of the term and I have to say it has the same convoluted, reverse-engineered ring to it as when people of today, lacking an explanation for how a Kentucky town got its weird name, simply make something up. Sleets' explanation for how he supposedly invented the High Five is so ludicrous and unlikely-sounding in so many ways and on so many levels, I'm not even going to bother recounting it here.

How do all these wacky rumors begin, anyway? I can personally tell you that as a child growing up in the early 1970s, we were already doing the High Five gesture amongst ourselves, as a distinct separate gesture from the hand-slapping "gimme five" kind of hipster affectation. And it was known as the High Five, by that name, even then.

Wikipedia points out that examples of the High Five can be seen in 1966 footage of Dean Martin and Louis Armstrong, and in a 1941 Abbott & Costello movie during a song-and-dance routine called "Gimme Some Skin, My Friend", just to cite two way-prior examples.

I'm not certain why anyone even cares who created the High Five, or why Kentuckians seem to be so eager to lay claim to it. But that's just another instance of what makes our Kentucky so unusual.

Perhaps I'll start insisting that I'm the guy who started everyone saying, "I feel you, man". (It's on the internet so it must be true!)
Posted by JSH at 12:00 AM