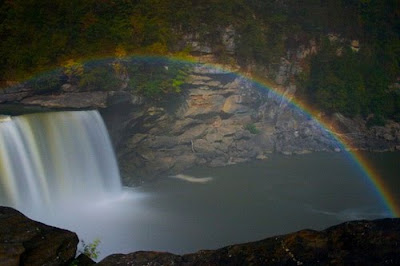 There are only a handful of places in the world where one can see a genuine moonbow - Victoria Falls, on the border between Zambia and Zimbabwe, is one such place where moonbow fans flock to view the phenomenon. And Cumberland Falls, near Williamsburg, KY is another.

What is a moonbow? It's a rainbow produced by moonlight rather than sunlight. They're relatively faint compared to rainbows, and they're always in the opposite part of the sky from the moon. The human eye doesn't often clearly see vibrant colors in moonbows, but they're very evident when long-exposure photographs are taken.

I used to think a rainbowy ring of light around the moon was a moonbow. Technically speaking, it is not. That would be a corona, a light-diffraction phenomenon produced by clouds or mist. Moonbows tend to be 22-degree-angle halos, formed during very rare circumstances, most often near waterfalls but not necessarily.

(Photo above by flickr user Bryce Fields.)
Posted by JSH at 9:45 PM