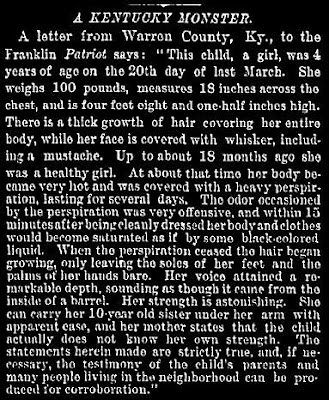 From the New York Times, September 17, 1877: a report originally published in the Franklin Patriot about a 4-year-old Warren County girl who allegedly was normal for the first two years of her life, but then began secreting a bizarre and foul black liquid from her skin, followed by a thick growth of hair all over her body excepting the palms of her hands and the soles of her feet. With these strange mutations, it was also reported she acquired amazing strength, being able to carry around her 10-year-old sister with ease.

Hirsutism is a relatively common condition, itself being a symptom of many different diseases, but the only other time I've ever heard of black sweat (aside from the Prince song) is from reports about the mysterious Morgellons Disease.
Posted by JSH at 6:59 PM