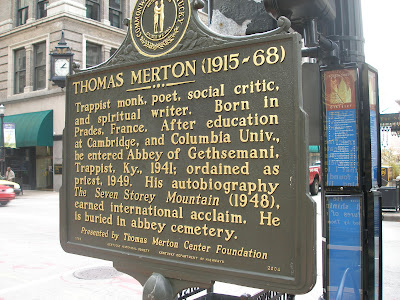 Kentucky's most well-known Trappist monk, Thomas Merton, was French by birth but traveled all around the world and attended school at Cambridge and Columbia before settling down to a monastic life at the Abbey of Our Lady of Gethsemani near Bardstown. Merton was world famous as an author and poet, as well as an international spokesman for social justice issues and interfaith relations. 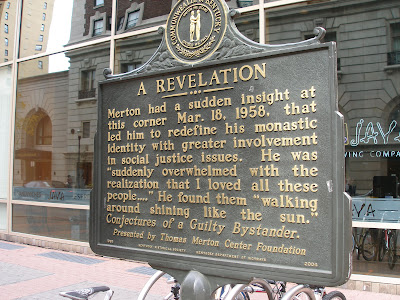 On March 18, 1958, Merton was standing at the corner of Fourth and Walnut in downtown Louisville when he suddenly had an epiphany, a satori, a mystical revelation. As he described it in his book Conjectures of a Guilty Bystander:

"In Louisville, at the corner of Fourth and Walnut, in the center of the shopping district, I was suddenly overwhelmed with the realization that I loved all those people, that they were mine and I theirs, that we could not be alien to one another even though we were total strangers. It was like waking from a dream of separateness, of spurious self-isolation in a special world, the world of renunciation and supposed holiness... This sense of liberation from an illusory difference was such a relief and such a joy to me that I almost laughed out loud... I have the immense joy of being man, a member of a race in which God Himself became incarnate. As if the sorrows and stupidities of the human condition could overwhelm me, now I realize what we all are. And if only everybody could realize this! But it cannot be explained. There is no way of telling people that they are all walking around shining like the sun."

Walnut Street has since been renamed Muhammad Ali Boulevard, and the four-way intersection he was standing at when he had his revelation is now renamed "Thomas Merton Square", encompassing Meidinger Tower, The Seelbach Hotel, National City Bank, and The Hertz-Starks Building.
Posted by JSH at 12:00 AM

I had that same realization once.

Also: when I was 12 I had an epiphany while taking a shower in Richmond: we cannot eliminate hate without loving all those who hate us.

We also cannot eliminate terrorism without no longer being afraid.