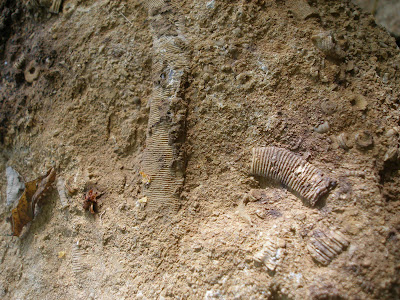 Recently beheld some excellent large rocks in Jefferson County - not going to reveal where since I haven't harvested the best specimens yet - filled with all manner of fossilized prehistoric aquatic yummies, including molluscs, worms, coral, and (mostly) crinoids from the Ordovician period. Click on the images for larger versions. 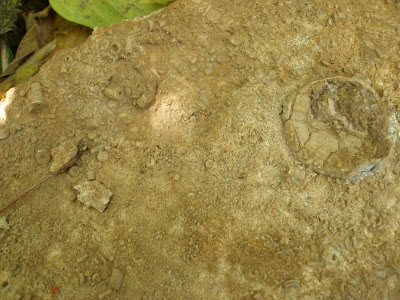 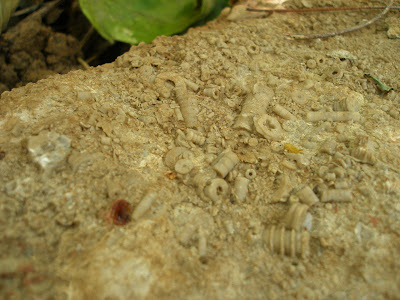 As Wikipedia's Crinoid page notes, "Some thick limestone beds dating to the mid- to late-Paleozoic are almost entirely made up of disarticulated crinoid fragments." And that's what we have here. One may also note on their Ordovician Period page that most of the fossil examples shown from this period are from Kentucky, Ohio, Indiana and Tennessee. This area must be an Ordovician hot spot for some reason (as would be evidenced by the Falls of the Ohio's famous fossil beds). 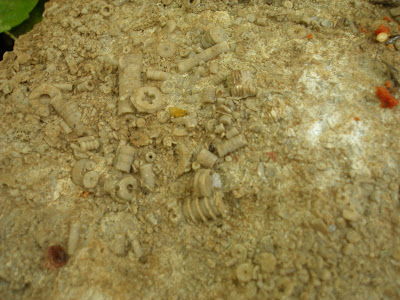 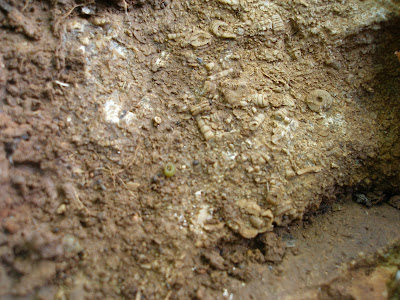 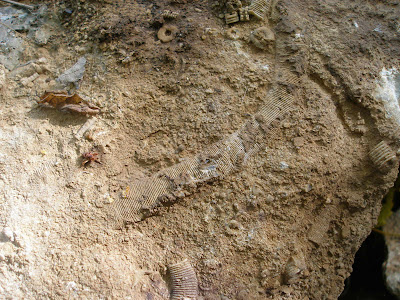 The stems of these prehistoric Crinoids are actually a series of separate cell-like segments held together by tissue, nerves and ligaments which were threaded through the central hole. This material often rots away before the segments themselves, leaving a pile of tiny disarticulated discs. In Europe, these were actually collected and strung like beads, variously called "Fairy Money", "St Boniface's Pennies", "St. Cuthbert's Beads", and "Star Stones".
Posted by JSH at 12:02 AM

The area around my late Grandmothers house was covered in fossils like that. They had dug a road down into a valley, and they put huge slabs of rocks to the side full of fossils. Well, huge to me at the time. you could even find them loose in the ground, just a bit under the grass. It was north east of Williamstown. near the lake of same name, if someone ever wanted to check it out. But the last time I was there I got pulled over because I looked "suspicious", so watch out.