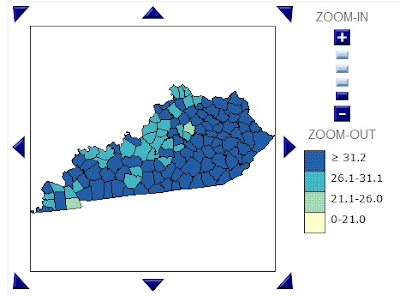 Another ignominious first for Kentucky: a new CDC study has determined that of the most sedentary and inactive counties in the nation, 4 out of 5 of them are in Kentucky.

Ironically, I just read about this upon returning home from a three hour hike in the woods. Heh.

It kinda irks me that a WKYT-TV story about the CDC report quotes Dr. Scott Black at the University of Kentucky as saying, "If you look at the areas that are particularly inactive, there's not a lot of opportunity for physical activity. There aren't gyms available, fitness centers."

I'm sure Dr. Black meant well, but we didn't have any gyms or fitness centers in the area I grew up in (Waco/College Hill/Bybee/Irvine) and we certainly didn't sit around doing nothing. We went out and did things. Still do. I find the suggestion that "there's not a lot of opportunity for physical activity" without the relatively modern concept of cheesy fitness centers to be absurd and even somewhat offensive.

Of course, growing up we didn't have the internet, video games, and handheld gizmos sucking our attention span anyway. We also didn't ingest high fructose corn syrup, Nutrasweet, Splenda, Acesulfame-K, or genetically modified foods. And kids back then weren't as doped to the gills on needlessly-prescribed zombie meds by evil creeps like Pfizer and Merck.

And interestingly, our grandparents smoked like chimneys and drank like ducks and yet their generation is outliving ours. Ask yourself, what environmental factors are different now?

We've already been declared #1 in the nation for depression, and Manchester has been determined to be double the national average in obesity. This year I urge my fellow Kentuckians to stand up, get up, get out, and prove these gloomy statistics wrong. My modest proposal is not that we need to build more "fitness centers" in rural areas, but that we first need to pull the plug on electronic distractions from what is important and what is real, and then start eating real food instead of Monsanto's monstrosities.

The four counties named by the CDC as most inactive in America are: Carter, Magoffin, McCreary, and Pike.
Posted by JSH at 11:54 AM

We need to know the methodology of this study. It just seems to be that any such conclusions have to be suspect; how would CDC know what people do with their leisure time?

Right you are, Pastor Smith. It being the CDC and it being part of an ongoing diabetes study, I just sort-of assumed their data was coming from local physicians in each county. Not so. I just checked it out here and as it turns out, the CDC based their findings on a telephone survey asking the question "During the past month, other than your regular job, did you participate in any physical activities or exercises such as running, calisthenics, golf, gardening, or walking for exercise?"

These scientists don't sound very scientific to me.