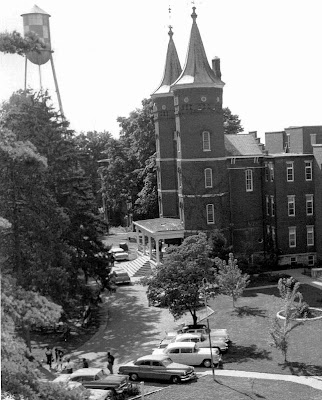 Some in-the-know folks have told me that many patients drowned trying to escape through an aquaduct that leads to the Lake for which Lakeland is named. I'm looking into that and will report soon. Another anecdote I've been told is that someone, presumably a patient, climbed the water tower on the asylum's grounds and committed suicide by jumping off. For some reason, this story has stuck in my head lately and I decided to try to figure out the exact spot where this occurred.

Fortunately, the photograph above gives us a near-precise indication of where the tower stood. Yesterday morning I trudged out there in search of the spot and found a semi-circular sunken area, partially paved, with a service road leading into it. This would seem to be it. 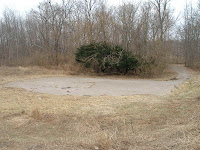 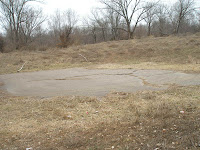 There were also other interesting and possibly related structures in the vicinity, like a large rusting pipelike opening that is filled with mud and leaves (image 1), an opening in the ground covered by a square stone slab (image 2), a huge hole in the ground that upon further inspection was revealed to be a partially exposed well of some sort (images 3 thru 6), a similar but above-ground enclosure that appears to have once been part of a sewer system (images 7 thru 10), and several other large holes that may lead somewhere or may just be really large fox holes (image 11). 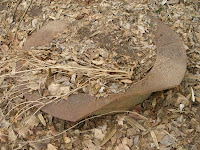 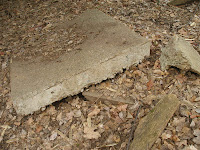 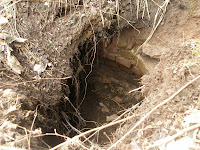 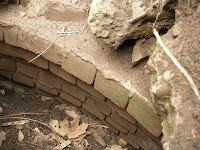 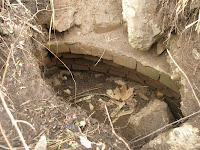 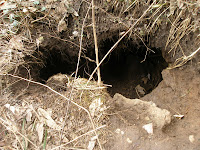 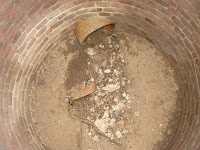 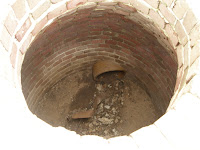 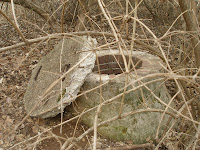 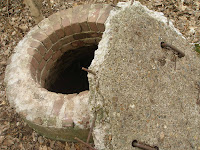 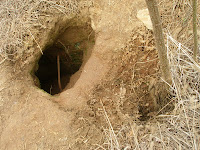 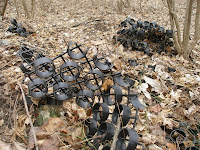 And keeping with my anti-plastic environmental concerns from yesterday's post about all the antiquated garbage along the fenceline, I noticed some lackadaisical park groundkeepers apparently chose to ditch a pile of plastic plant containers in the nearby woods (image 12). Not cool.

It's been said that the asylum area is a great hotspot to get ghostly EVP recordings of the voices of the dead, especially near the cemetery. I remain lukewarm on the EVP concept, just as I have little reason to swallow most of the other gimmicks employed by so-called would-be "ghost hunters". Although I heard a tape a few years ago purportedly recorded here, sounding indeed like spirit voices, there was no chain of evidence for it. And I don't take anything on faith.

Mind you, that doesn't mean I necessarily disbelieve in ghosts and ghouls and things that go boomp in the night. I would hazard a guess that the asylum grounds are dense with gathered spirits, entities, life-force energy, or whatever you wish to call it. This would probably also include the unfortunate soul who jumped from the water tower and hopefully found some subsequent peace. But for those who seem to have an unhealthy obsession with "contacting the dead" and so forth, it's going to take more than a tape recorder, a gaussmeter, and some wishful thinking to establish communication with anything unseen.