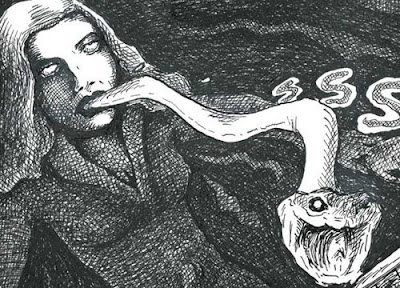 Jackson County's very own J.T. Dockery will unveil his new Spud Crazy graphic novel (based on a story by Nick Tosches) tonight at Lexington's Institute 193!

J.T. Dockery is one of those rare artists that seems to exist both within the work he creates and alongside the rest of us in the “real world.” Women, booze, cigarettes, and shady characters spill onto the page and seep back into real life–drawn, stacked and stashed into portfolios or passed on the street. No one is safe.

Spud Crazy, originally published as a script in The Nick Tosches Reader, has been re-imagined by Dockery as an excerpted graphic novel. Wielding his penchant for fragmented plots, bizarre themes and mash-ups, Dockery has composed, directed and illustrated Tosches’ original script into a visual film complete with soundtrack and frame-by-frame action. The resulting package is some new hybridized publication: part comic book, part musical score, part academic essay, part artist-edition and all SPUD.

The exhibition runs from 6pm to 9pm and will feature a live performance by the Spud Imperials.
Posted by JSH at 7:20 AM