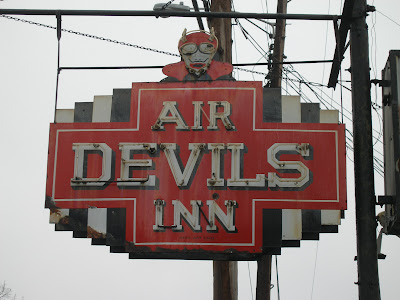 It's not often you encounter a saloon with such old-school cool as Air Devils Inn. Even now in the 21st century, they are a strictly cash-only business. I worship them for that luddite stance every bit as much as I appreciate that they keep the joint dark as a coal mine. I'm a great fan of dark bars.

Their neon sign is awesome-O, and by night even more so. (Some say it's the oldest neon sign in Jefferson County, though I'm not quite ready to bet the farm on that factoid.) Their name derives from its proximity to Bowman Field, and harkens back to the truly good old days when pilots where pioneers; when aviation’s most distinguished hell-raisers, dizzy from their aerial antics, would march directly to the pub to hoist a few beers and sober up.

They were one of the first and most ferocious resisters to Louisville's ridiculous smoking ban, and one of the last to wave the tattered flag of freedom of choice to the very end when everyone else had considered the battle lost. 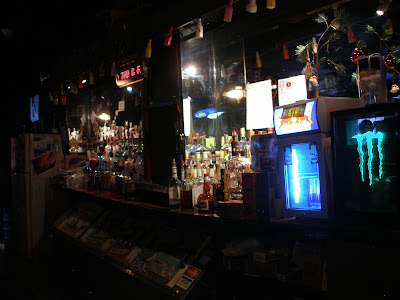 Strange as may seem, there are many - inside city Government and outside of it - who would dearly love to see Air Devils Inn cease to operate. Why? I honestly am not sure. Chalk it up as proof that true evil does indeed exist in this world.

Friend, I advise you to go and make your pilgrimmage to Air Devils Inn now while you still can, before it's just another entry in the hallowed hall of great Kentucky landmarks that got torn down for the sake of someone else's sinister and short-sighted agenda.
Posted by JSH at 2:28 PM