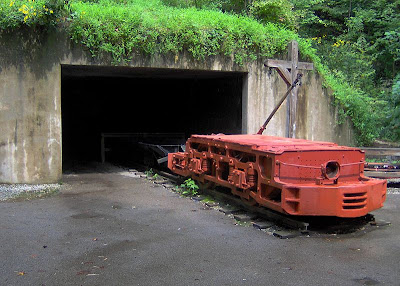 McCreary County's Mine 18 was operated by the Stearns Coal and Lumber Company from 1937 to 1962, in the now-defunct town of Blue Heron. The community originally stood on the banks of the Big South Fork of the Cumberland River.

For many years, Blue Heron remained a "ghost town" as its few remaining buildings quickly fell into disrepair and collapsed. But in the 1980s, a strange project to rebuild Blue Heron as closely as possible was enacted, and now visitors can travel to what amounts to an enormous full-scale museum replica of a Kentucky coal town as it looked during its heyday. Most of the buildings are only empty shells meant to be viewed from the exterior, and are referred to on the National Park Service website as "ghost buildings".

Unfortunately, you can't go exploring deep into the mines, which to me would be a lot more interesting than seeing a fake coal tipple. Someone should open some sort of underground resort in a Kentucky mine; if not this one, then perhaps the abandoned mines in Boonesboro. 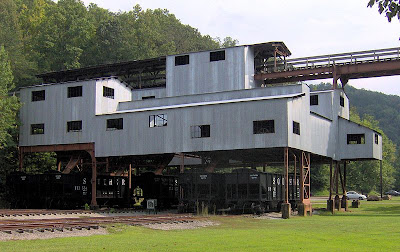 You can see photos of Blue Heron the way it was back in the day by clicking here, and also note the photo gallery of the nearby town of No Business, KY with plenty of nice abandoned buildings.
Posted by JSH at 10:47 PM