BBC Exec Based in Midway 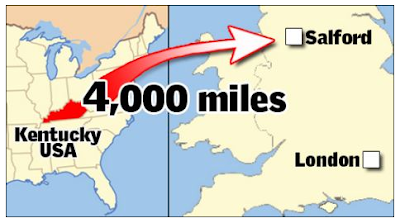 There's been quite a flap going on in the British media about a migration that the BBC is undergoing - I haven't sorted out all the details, but the long and short of it is this: the BBC headquarters is being uprooted from its home in London to a place 200 miles away called Salford. The controversial project is going to cost a fortune, and many lifelong BBC employees are furious at being forced to move to another city.

The man in charge of this mass migration to Salford is Guy Bradshaw, whose consulting company Equals Consulting is behind the recommendation to move the BBC, as well as responsible for its implementation.

Historic old Midway, to be exact. According to an article in the Daily Mail, Guy and his wife (who is American) and daughter used to live in Kent before selling their house last year and moving to Kentucky.

For some reason, the British newspapers are up in arms at the revelation that Mr. Bradshaw's home so far away from London, and are trying to spin this into somehow rendering the entire move to Salford suspect. While the idea of packing up the BBC lock-stock-and-barrel and lugging it 200 miles away may indeed be a really stupid idea, I don't see the relevance of Mr. Bradshaw's living arrangements. If anything, his willingness to commute back and forth from Woodford County, Kentucky to Europe shows that he's not asking the BBC staffers to do something he isn't willing to do as well. They're complaining about being moved 200 miles from their families? Well, Bradshaw works 4000 miles from his!

I don't claim to have studied this matter in depth or to have but a smattering of the facts, but at a glance it seems to me that with looming budgetary disaster on the horizon for the BBC, something drastic has to be done. Is moving to Salford the answer? I don't know. But things are so bad that there's even rumblings of BBC3 and BBC4 being abolished, and in December BBC Chairman Sir Michael Lyons refused to deny those rumors. Now that's scary to me. If this man in Kentucky can promise that the move to Salford will keep 3 and 4 alive, I'm behind him six hundred percent.

(On the other hand, I hope Equals Consulting is better at real-world logistical planning than at internet self-promotion: their website is simply horrid, written in an inhumanly dense style that quite literally is nothing more than a mile-long string of random empty SEO keywords and phrases!)
Posted by JSH at 9:08 PM