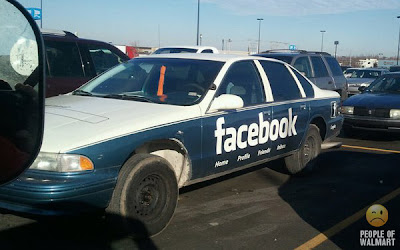 Someone just loved that Facebook so much, they had their ride all tricked out in Facebook-adoring graphics. I can't imagine liking a website - any website - so much that I'd actually pay money to have it detailed to resemble it.

But hey, it's a free world, or so I like to pretend.

I found this gem on another website that I don't particularly care for - People of Walmart, a place where people surreptitiously take pictures of other people shopping, then post them to the web and make fun of their weight, their attire, their sexual preference, their social status, etc. (That's not to say I didn't chuckle hard at some of the stuff on there, but funny or not, I'd still love to see sites like this get shut down forever.)

But the case of the Facebookmobile doesn't end there: I also found another picture of it on Craziest Gadgets.

The People of Wal-Mart site, whose content is mostly user-submitted, lists this photo as having been taken in Kentucky. Has anyone else seen this thing out there on the road?
Posted by JSH at 3:52 PM