An American Chestnut in Adair 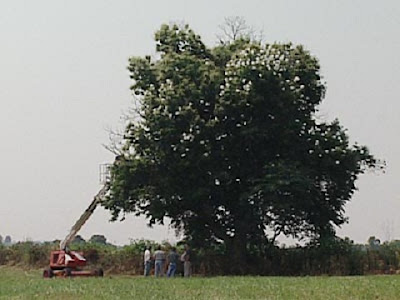 The American Chestnut, or Castanea dentata, once ruled the Appalachians with a range extending from Maine to Mississippi. They were extremely important to wildlife, providing much of the fall mast for species such as White-tailed Deer, Black Bears, Wild Turkey and, before it went extinct, the Passenger Pigeon. And now the American Chestnut is close to extinction itself.

Sometime in the late 19th century, the chestnut blight (Cryphonectria parasitica) was accidentally introduced into our country by imported chestnut trees or cheap imported Chinese lumber. The Chinese and Japanese species of Chestnut are resistant to the blight, but America's had no natural resistance to it. The disease was first reported on trees in the Bronx Zoo in 1904, and by 1940 almost all adult American Chestnut trees in America had been wiped out.

There are still many small young trees, shoots and saplings out there, but they rarely get a chance to mature. Interestingly, the root systems of the former Chestnut trees are still there under the soil and they're still trying to produce new shoots, but sooner or later the blight gets the new trees before they can get very big. A few actually manage to get several feet tall before succumbing, but that's nothing compared to the 150-foot height of a healthy and mature specimen.

It has been estimated that before the blight, the total number of American Chestnut trees in eastern North America was over three billion. And today, the number of them over 60 centimeters in diameter within the tree's former range is estimated to be fewer than one hundred. 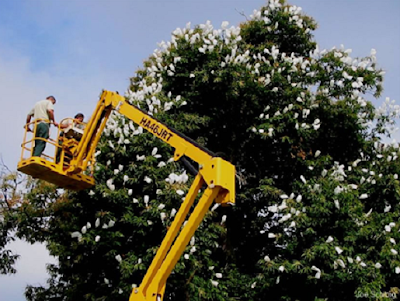 And so it was an event of considerable importance when in 1999, an 80-year-old, 50-foot American Chestnut was discovered in Adair County, Kentucky.

How did it survive when so many others did not? No one's really sure. But it, along with other survivors that have turned up in Ohio, Tennesseee, Georgia and Alabama, is providing researchers with hope that all is not lost for the American Chestnut. The American Chestnut Foundation is working to turn back the clock on this endangered tree, and I encourage you to get involved with their Kentucky chapter.
Posted by JSH at 10:35 AM

Awesome ! thanks for posting this. I have seen many of these tree while hunting...just rotting away...I always wished they'd make a comeback and now they are getting a chance.

We have several seed nuts in our freezer that came from an American Chestnut in Breckinridge County. Here's hoping they will grow and prosper when we find good spots to plant them.

Donna, that's great! if you haven't already, you ought to contact the Kentucky chapter and let them know; I'm sure they'll have excellent advice about how best to go about it. Very exciting!

I have not been there recently, but a very reliable friend tells me that there are 3 or 4 American Chestnuts growing at Arbor Lodge State Park, near Nebraska City, Nebraska.