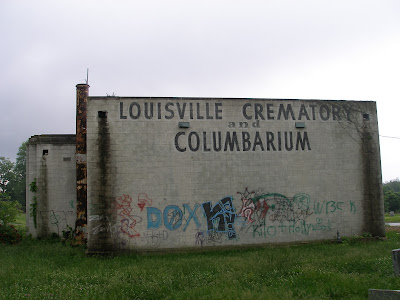 The abandoned Louisville Crematory and Columbarium is part of Eastern Cemetery, which was shut down in 1989 when a sick discovery was made: that cemetery officials had been secretly burying multiple people in the same grave since the 1920s, and deliberately mishandling cremations as a cost-cutting measure.

In 2005 it was discovered that a walk-in crypt in the cemetery was actually unlocked, and filled with boxes of cremains (cremated human ashes)! Some of these boxes of ashes were labeled with multiple names, and still others simply said "unknown." From a WLKY news story that year:

"It was the burial ground for nearly all of Louisville's prominent 19th-century black leaders and many other dignitaries, but historic Eastern Cemetery has turned into a chilling horror story that only gets stranger as the years go by. It's basically abandoned after the discovery a decade ago that bodies are literally stacked on top of each other -- 48,000 people buried in 16,000 graves ...then a state investigator determined 95 percent of the infant graves here are as shallow as 6 inches deep. Now, we find a crypt on the middle of the property, not locked, containing what appears to be the cremated remains of dozens of people." 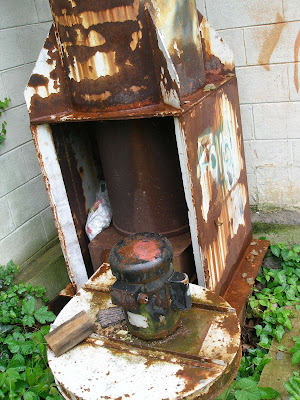 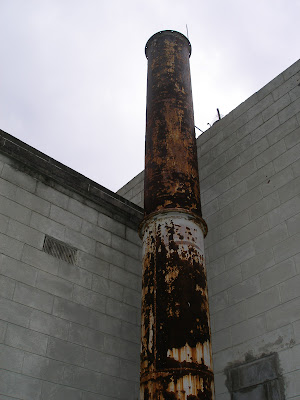 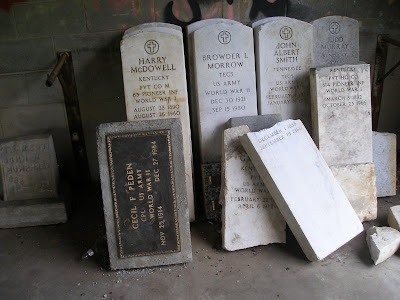 A shed in the back is filled with gravestones, some damaged badly. It would seem that no one is now able to determine where these stones are supposed to go. Even before I found out the backstory of these horrors, I've felt palpable vibes of despair - practically cries for help - emanating from this place when I drive by it.

A few years ago, in an article I wrote for the now-defunct Louisville Guide magazine, I interviewed a fellow who was sick and tired of how everyone had abandoned the cemetery. He took it upon himself to start mowing the lawns there, and to attempt to fix the damage done by vandals. I'm not sure if he's still taking on that herculean task, but someone is indeed still mowing it.

Grave desecration is commonplace here. When I drove through there today, I noticed numerous columns and headstones knocked over that had not so before. And I heard a rumor from a reputable journalist friend of mine that there is evidence of some sort of ritual animal sacrifices taking place here recently, whether by some arcane occult weirdos or by stupid goth kids (probably the latter). Four panels of marble have been forcibly removed from the mausoleum and the containers are now empty. Bronze nameplates have also been pried off of other panels. It's truly sickening. 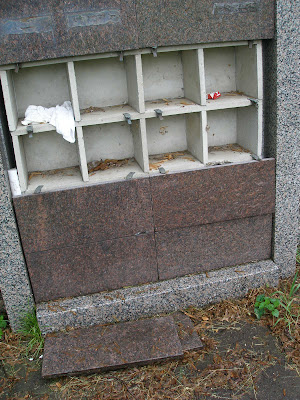 Since Eastern Cemetery is adjacent to Cave Hill Cemetery, whose concertina-wire-lined superwall runs along two sides of the place, doesn't it make sense that it should just be taken over by them? Without some sort of major protections in place, this already tragically damaged cemetery will rapidly be destroyed completely at this rate.

The Crematory and Columbarium has been permanently bricked up, apparently to prevent vandals from gaining access. In so doing, however, they performed a sort of vandalism to the building themselves, by destroying the beautiful ornate entryway which had been the only nice thing about the edifice in the first place.

(Postscript: Very similar atrocities have occurred in Cincinnati's Wesleyan Cemetery... is it something about the dark mojo of the Ohio River that encourages such things?)
Posted by JSH at 12:00 AM

The Return Of The Living Dead?

Wow. how could such a thing be allowed to keep happening??

I was just there today 6/2/09 and it is a shame that no one seems to be taking care of the place. Do the Methodist still own any part of the place? They should be requested to assist in keeping the place up, at least cutting the grass since they are the ones who first established the grounds.

I am a Kentucky native living in Chicago. Here is a recent occurrence of grave desecration that has horrified families of the deceased and the public. http://www.chicagobreakingnews.com/2009/07/sheriff-bodies-dug-up-dumped-at-cemetery.html. They doubt it is possible to find all the bodies or identify them. Just plain sick.

In 1954 I was 3 years old living in Louisville with my Mom and Dad. My Mom was pregnant and my Dad was out of town when she started to go into labor. I remember small parts of this so the rest has been from her recount of this story. She went to Kentucky Baptist Hospital and delivered a "stillborn" baby girl named Cathy Moorhead on July 27,1954. The problems I have always had with this story is that my Mother always insisted she heard the baby trying to breathe. She also said she never was allowed to see her afterward. The vital statistics records indicate fetal cause of death was premature rupture of bag of waters 5+ (soomething eneligible) maternal causes premature labor at 6 mos. birth weight was recorded at 2 lbs by attending physician W.E. Oldham MD. The creepy part sets in when I read Cathy was cremated at Loisville Crematory by funeral director Arch L. Heady and Son. Then there is a stamp on the side of this certificate reading Barrstt Funeral Home Aug 6 1954. My Mother could never talk about this incident without hysteria and now she has passed as of Nov 23, 2009. Mt Dad seems to have little recollection as well. I know for a fact back then many babies were declared stillborn yet lived only to be sold or given away. Either scenrio makes me feel sick. Is she buried in the piles of cremations at this crematory or did she survive and grow up thinking she didnt fit in somewhere? Is there anyone who might be able to solve this mystery?

I was @ Eastern Cemetary this morning for a Vet Memorial Rededication of the mausoleum. My mom (Carol McLeod) was 1 of 3 artists who just completed a mural project on the mausoleum there. They painted an angel holding a dove on an American flag background. The entire cemetary grounds were mowed/weed whacked. There has been a lot of volunteer effort recently into restoring Eastern Cemetary as much as possible. Its starting to look, and more importantly feel, more peaceful and cared for. She (my mom) will likely soon post pics of their Eastern Cemetary project on her website: www.pwnkle.com

I've been involved with Eastern for a number of months, and saw the vets who were painting the columbarium/chapel. I was also at the dedication.
When I first started visiting Eastern, I got the same feeling, a feeling of anger, unhappiness, and a general "get out of our cemetery" type thing. Since I've been there for about 5 months, it seems that I have been "accepted", maybe because I want to honorably remember those there.
I found a family plot, the markers, and the plot lines for a family from out of state, cleaning the plot and stones. My intent is to keep that plot clean and neat.
I've somewhat "adopted" Eastern, in that after spending a few months there, I wanted to document as many of the memorials as possible, before they are totally unreadable or destroyed.
So, I am working on photographing all the memorials there, sometimes looking the names up on ancestry.com to get more information, and making memorial pages on findagrave.com. If I find family in the ancestry.com search, I offer them the photo.
I also have photos of the new paint job of the crematorium..it is beautiful. Everyone did a super job, and please note that the cemetery is mowed, weeded and sprayed on a regular basis.

I grew up in Louisville, KY. I always believed that Louisville was a classic Southern City, I learned manners and how to live with morals.
My Mother died when I was only 1 1/2 years old and is buried at Eastern Cemetery. While I have only visited the site many years ago, prior to the problems of today. These current conditions are heart breaking, puts a black cloud over the City's of Louisville and is a shame! Why hasn't anyone started a Not-for-Profit group to raise money for up keep expenses.

My paternal grandparents died in 1965 and 1971. Their ashes were interred at the Louisville Columbarium. Where were the ashes relocated to when the Columbarium was closed in 1989? How do I find where my grandparents ashes are?

I want to send out my thanks to the volunteer efforts to clean up this cemetery. There are many family genealogists/researchers that bring us to a winding road of the cemetery. It's nice to know where your relation is buried and that they are still being cared for even though you have never met them.

My maternal great-great Grandmother is buried there. I hope someday I will be able to feel at ease about this situation and feel comfortable that she is in a blessed final resting place.

God's blessings and peace to all!

My work at photo-documenting Eastern Cemetery continues...I've now taken almost 3,000 photographs at Eastern, and all are placed on findagrave.com. The cemetery grounds are looking much, much better, and the "anger" that I first felt seems to have abated...maybe I've beena accepted by the residents. :)
Eastern Cemetery isn't forgotten..for those who have family there, please honor them with a visit.