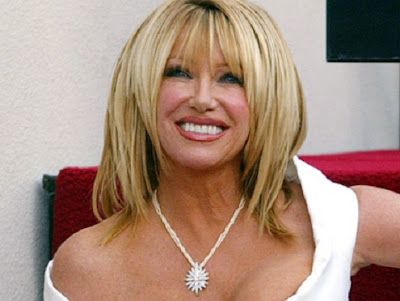 Hollywood star Suzanne Somers is in Kentucky - unfortunately not to visit Keeneland or to score some beer cheese, but to testify in court.

You may remember (I don't, honestly) that back in 2006, Somers and former Kentucky governor John Y. Brown, Jr. teamed up for a restaurant called Suzanne's Kitchen. The place failed after only five months, and now one of the investors wants his money back. According to WTVQ, "John Bouchillon of Louisville is suing Somers and she's in Lexington now for the trial. Bouchillon claims he was misled into investing $400,000."

WKYT, however, is reporting that Somers had no written contract with anyone in this matter, and was only lending her face and name to the project on a good-faith verbal agreement. In court, Brown has testified that like so many restaurants, the project simply failed and they can't be held responsible; investing in any restaurant, after all, even one endorsed by a celebrity, is a shaky proposition in this economy. Caveat emptor.
Posted by JSH at 6:54 AM