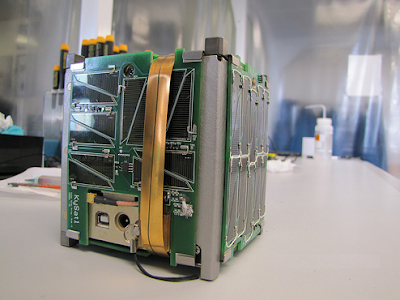 It was almost exactly one year ago when I wrote about KySat-1, a picosatellite that marks a major entry for Kentucky into the Aerospace industry. Although I thought it was supposed to have launched back in November, apparently it has not yet - the launch is now slated for February.

I just stumbled upon this new YouTube video from the folks at Kentucky Space giving us the lowdown on what's going on and going up. Pretty exciting stuff. You can also follow Kentucky Space on Twitter.

KySat-1 will be equipped with a camera and a 2.4-GHz industrial/scientific/medical band radio, which will be used to test high-bandwidth communications in the license-free portion of the S-band.

Also spotted on YouTube: this video of the sunrise over Morehead State University's amazing 21 meter radio telescope.
Posted by JSH at 10:40 AM