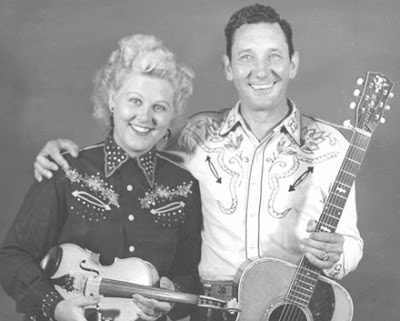 One of my favorite acts on those 1950s full-color "Stars of the Grand Ole Opry" films that have been making their way around America via truckstop tapes for years now: Salty and Mattie, who stuck out like a sore thumb with their magnificent harmonica-driven rock and roll blues antics like "Harmonica Boogie" and the baffling Popeye-goes-Halloween number "The Ghost Song". For years I wondered who the heck these two oddballs were and how they got to share a stage with superstars like Faron Young, Ernest Tubb, June Carter, Webb Pierce, Carl Smith and Jim Reeves.

The how still isn't clear, but I now know the who: Floyd "Salty" Holmes was from Glasgow, KY and was a founding member of the Kentucky Ramblers, who subsequently changed their name to the Prairie Ramblers and became best known as Patsy Montana's backing band. He also appeared in some early Western films, thanks to his friend Gene Autry pulling some strings for him.

Salty drifted into obscurity after he and Mattie were divorced in 1956, and he passed away on January 1, 1970. 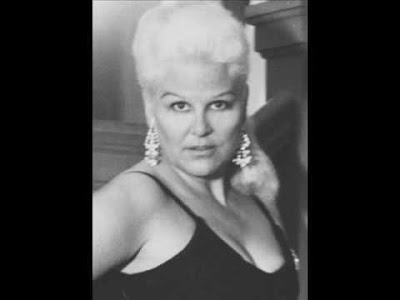 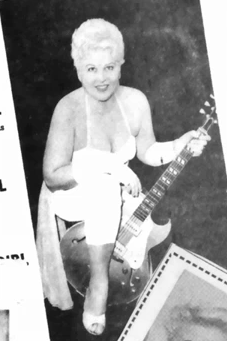 Amburgey got her start recording and performing on Lexington's WKLP-AM with The Sunshine Sisters and then went on to brief fame as Jean Chapel, recording many rockers for Sun and RCA such as "I Won't Be Rockin' Tonight", "Don't Let Go", and "Welcome to the Club".

RCA tried to bill her as "the female Elvis" but by the early 1960s the buxom blonde rockabilly belter was largely forgotten. She went on to an even more successful songwriting career, however, writing songs for country stars such as Marty Robbins and Tammy Wynette. Her daughter Lana is also a singer-songwriter, having placed songs with Nancy Sinatra, Eddy Arnold, and Lester Flatt.

Jean/Mattie/Opal died in 1995. I've been unable to find out where she and Salty are each buried. Does anyone know?

Bonus Saltiness: "Stuck With Love", "John Henry", "Blue Eyes Cryin' in the Rain", and "Cannonball Special" with Joe Maphis.
Posted by JSH at 8:02 AM