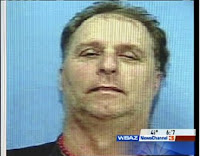 This morning I came across this story from WSAZ-TV in Arkansas, telling of an FBI fugitive from "an Arkansas cult" turning up dead in a rural home in Lawrence County.

John Erwin Kolbek has been the subject of a national manhunt by the FBI since 2008, facing charges of assaulting people - including women and children - while working for Tony Alamo Ministries. If you remember Rev. Alamo (pictured below with his wife Susan), he's currently serving 175 years in the slammer for various alleged atrocities committed at his compound near Texarkana. Alamo, known as prisoner #00305-112 around the Federal Correctional Institution in Terre Haute, Indiana, will be out of prison in 174 years. However, his ministry still carries on, more successful than ever - his message is still carried by radio stations around the world and the church has published an extensive series of rebuttals against Alamo's accusers.

Kolbek died of a heart attack shortly after his estranged wife placed a 911 call trying to get medical help for him under an assumed name. According to WSAZ, "John Kolbek died a short time later, but it wasn't until his body was taken in for an autopsy that authorities realized he was wanted by the FBI." Reports state that Kolbek had reached out to his wife from an undisclosed location in the Somerset area.

I'm curious about why Kolbek chose Lawrence County and Pulaski County, Kentucky as a place to hide out. Early speculation seems to be that he has not been in Kentucky very long, but no reasons are being given to support that thesis.

The incident is sure to stir up renewed interest in the Alamo case, which is still a bone of bitter contention for many who believe their ministry's founder was framed.
Posted by JSH at 3:09 PM