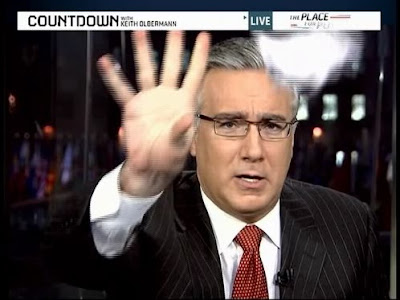 I try to avoid angry blowhard talking-heads from both sides of the political aisle - just as I can't abide right-wing crank Bill O' Reilly, neither can I tolerate left-wing crank Keith Olbermann. Neither Republicans nor Democrats even come close to dealing with the issues that I consider important, and neither side has offered many workable solutions to world problems in my lifespan. And when it comes to civility, I have always found Olbermann to be every bit as childish, condescending, and abrasive as the jerks on the opposite side he claims to stand against, such as Rush Limbaugh, Ann Coulter, and the aforementioned O' Reilly. I wish they'd all get off the air, so-called liberals and so-called conversatives alike.

I have to say all this to preface my comments, because most people live in such a knee-jerk either-or bicameral box of their own imprisonment that if I dare to knock the big-headed K.O., people will automatically assume I must be a Republican.

Though I gave up watching his show long ago, I'd have to be living under a rock in Utah to not know that Keith has been the subject of much speculation ever since he found himself in serious hot water with MSNBC execs for his political contributions. This past November, MSNBC suspended him indefinitely and without pay for violating their policy requiring employees to ask for management's approval before making any political contributions. A weird policy, and possibly a stupid one. But it is the network's policy, and Olbermann did break it. He was soon reinstated, but apparently was so angered over the incident that he immediately began discussing his exit from the network the moment they took him back.

Now he's resigned and has made the bizarre move of announcing his new venture: a Twitter account mocking FOX News, presumably from which he will continue his tired shtick of name-calling, insulting, and calling just about everyone "the worst person in the world".

But what interests me most about all this is that Olbermann's downfall began in part because of Kentucky senate candidate Jack Conway, who was one of the three politicians Olbermann made a $2400 donation to. The other two were Paul Grijalva (who had just been a guest on Olbermann's show prior to the donation) and even more interestingly, Gabrielle Giffords, who was subsequently the victim of an assassination attempt by some Salvia-smoking conspiracy buff named Jared Lee Loughner whose mind reportedly slipped off the rails after being fired from his job at Quizno's.

So was it really that important to Olbermann that he donate to Conway's campaign in Kentucky? Important enough to risk the wrath of his bosses by flouting the company policy? And he can't say he didn't know about the policy, because he and Rachel Maddow (who I still adore, although even she sometimes gets a little too snarky and "I'm so clever" for my taste) have previously taken FOX News to task over their lack of a similar policy.

As Rachel Maddow and Firedoglake have pointed out, FOX News commentator Sarah Palin donated twice to the campaign of Kentucky's Rand Paul - once by herself and once through SarahPAC. Whether or not there's anything wrong with that is not that important an issue to me; if FOX News wants to be so visibly financially connected to the politicians they supposedly report impartially on, well, let them. It certainly hasn't hurt their standing amongst the masses: FOX News was deemed "most trusted news channel " by a recent poll conducted by Public Policy Polling.
Posted by JSH at 8:06 AM

Read the report you linked to... It says: In this month’s poll, Fox is still relied on by more than some other competitors but is far behind PBS, tested for the first time. PBS is the only group trusted by a majority and distrusted by fewer than 40%.

That in no way says the Fox is most trusted.

The poll you are referring to is not the same one that was I speaking of.

But it's good to know that PBS is now included in their computations, and that it's eclipsed FOX.

Keith Olbermann is going to work for Al Gore at Gore's TV station: Current TV. He's very excited about it and I believe he's also been given an interest in the company.

Yeah, I saw the announcement several days ago. I don't get it; it's a HUGE leap backwards for him to go from MSNBC to a network that practically no one watches.

As Entertainment Weekly notes: "Current TV can use all the help it can get — ratings are so modest they’re not even ranked in Nielsen’s daily cable charts."