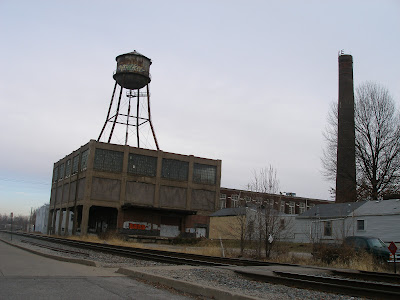 I love graffiti art, but I don't love it when it ruins people's private property, such as the toy-tag throwdowns of sociopathic goofballs like "Kamel" and crew. And unfortunately, it usually does.

However, when graffiti is applied to semi-abandoned structures that are already ugly eyesores, hey, why not? And I'm pretty certain that this corroded water tower off Louisville's Logan Street is as abandoned as the decrepit factory beneath it. 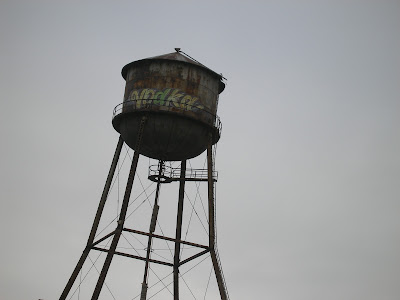 This "Vodka" guy, whoever he may be, went to considerable trouble just to paint his nickname on this tower. You can gauge the relative size of a human to everything else in the picture by observing the ladder that goes up, and the railing that circles the tower - clearly, this nut had to stand on something in order to finish such a large mural. Can you imagine standing on something on a narrow walkway that's hundreds of feet up in the air?

Imagine what someone with such determinism could accomplish if he had some goals in life other than to spray-paint his name all over stuff.
Posted by JSH at 11:54 AM

Imagine what someone with such determinism could accomplish if he had some goals in life other than to spray-paint his name all over stuff.

Maybe he or she does have goals in their life other than "painting his name all over stuff" Enjoying an alternative form of art isn't an indicator that this person is a low-life with no goals or aspirations.

"Imagine what someone with such determinism could accomplish if he had some goals in life other than to spray-paint his name all over stuff."

You never know about Graffiti Artists, they could have totally awesome lives during the day.

Who knows, maybe Vodka is a s doctor, a lawyer, or a writer ;)

Kristen, let me put it as plainly as possible: if you don't own a building or a water tower, that building or water tower is not yours to fuck around with. Go spray paint something that does belong to you instead.

If you think people somehow do have a right to mess with other people's property in the name of "art", then you might be a sociopath in training.

As a former graffiti artist myself, I know all too well the ways of the medium. But let me tell you, I never considered vandalism "an alternative form of art." (And I actually painted pictures on abandoned buildings, not just a word or a nickname.)

I got over my "graffiti period" many years ago, and don't do that sort of thing anymore. I will continue to gently berate those who still deface other people's property with their stupid tags and try to nudge them towards doing something realler.