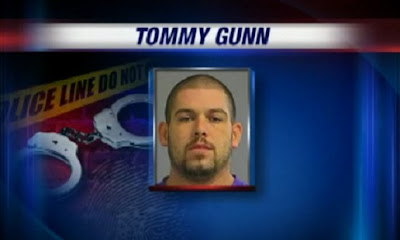 And then there's this suave dreamboat who's on WLKY's crime report for assault, stalking, and more. Police say he assaulted a woman because he thought she had a phone number written on her arms.

27-year-old Tommy Gunn (that's his name, I'm not making this up) forcibly shaved the woman's arms and poured Kool-aid over them, apparently because he thought this is the traditional, time-tested "Hints from Heloise" way to make a secret invisible phone number written on a woman's arm magically appear. He then, according to WLKY, "struck her and dunked her head in water."

Keep in mind that we haven't heard Mr. Gunn's side of the story, of course, and I'm sure he has a perfectly good explanation for his psycho behavior. Like... er.... um.... well, I can't imagine what that might be, but I'm sure it would be a fascinating insight into the human condition.
Posted by JSH at 6:11 AM