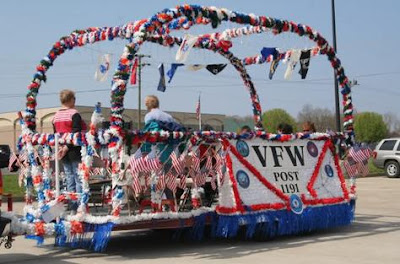 Tater Day is a festival held on the first Monday each April in Benton, KY. But don't be fooled by the name - this is (unfortunately) not a celebration of the noble potato, but the sweet potato. According to the lore built up around the event, it's supposedly one of the oldest indigenous festivals in the state, and grew out of the old "court day" events dating back to 1843, when farmers would set up selling and trading their livestock and produce in the town square.

Above: a float in the Tater Day parade. Below: Tractor tailgate party! (Photos by kilowat1946.) 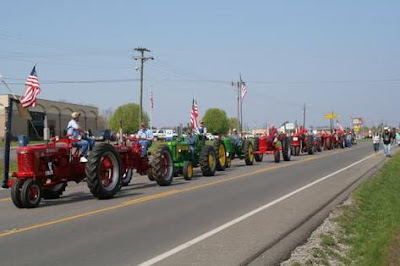 Wikipedia, at the moment, has a humorous entry about the event that reads like an advertisement, apparently posted by an overzealous promoter:

"It includes Political floats, Marshall County High School marching band, horse and buggies, clowns, vintage cars, horses, Ms. Tater Day, and other things for which Marshall County is known. There is also junior ms. tater that is allowed for little girls ages 5 to 12, and a little Ms., little Mr., tiny Miss, and baby Ms. Tater day pageants and floats for the younger kids. Tater Day also has carnival rides, games, a market, mule pulls, and several other exciting events. Ms.tater announces a speech about how grateful she is to be Ms. Tater. Other exciting events are the biggest potato contest that attracts large potatoes from across the town and a potato eating contest. They find the potatoes from the Potato bake sale hosted by MCHS. All in all The Tater Day festival has a plethora of exciting events and is for tater-lovers of all ages!"

I was googling my user name found all the links to my pictures that have been used,didn't know so many were out their
kilowat1946 at yahoo dot com