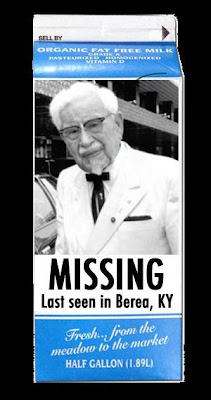 The stakes have been raised in search for the stolen bronze bust of Colonel Sanders, recently stolen from a KFC in Berea. The management have decided to post a reward - $500 worth of free chicken - for the man or woman who brings them the head of Harland Sanders. (How much for Alfredo Garcia's?)

Far be it from me to carp, but a mere 500 bucks worth of food seems like a rather chintzy reward. I mean, the head's worth way more than 500 bucks cash, but 500 bucks chicken? Me, in this economy, were I some sort of Boba Fett-like bounty hunter sent out on a mission to retrieve the stolen idol by any means necessary, I'd say keep your fried birds, Clyde, give me shekels, folding green, mazuma, dead presidents, filthy lucre, do re mi, money.

(Graphic filched from The Consumerist).
Posted by JSH at 12:00 AM