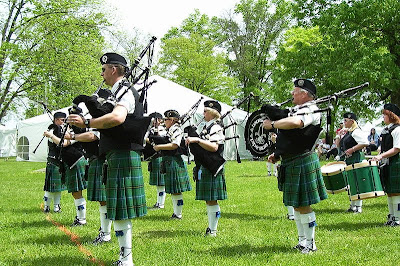 The Louisville Pipe Band is a competitive and performing "Grade Four" and "Grade Five" Pipe Band based in Louisville, Kentucky. Members are drawn from throughout the state and southern Indiana, and they meet to rehearse on Sunday evenings from 5-7 PM at Buechel United Methodist Church, 2817 Hikes Lane.

They'll be performing at the St. Patrick's Day parade on Bardstown Road in Louisville - and that's at 3pm, Saturday, March 13, 2010. Don't miss it.

What I find especially interesting about the band, however, is their tartan. They chose as their uniform kilt the ancient Henderson Tartan in honor of Richard Henderson, he who founded the Transylvania Colony with Daniel Boone on the land that would later become Kentucky.

Because of this supreme honor and respect the Louisville Pipe Band have paid Henderson, they are being considered, collectively and individually, for honorary membership in The Old Older of Transylvania Gentlemen.
Posted by JSH at 11:27 PM

I think there should be a posting on here about Louisville-based Slint next ... ;)