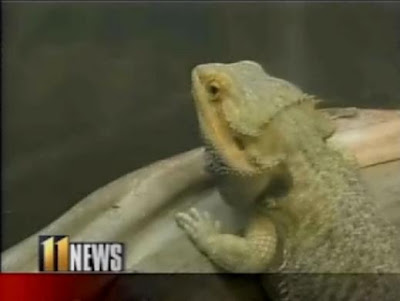 From News of the Weird:

In Morehead, Ky., in December, two men, ages 44 and 18, were charged with theft for allegedly swiping an 18-inch-long bearded dragon lizard from the Eagles Landing Pet Hospital and trying, in two beverage stores, to exchange it for liquor.

The full story, found on WHAS-TV, gets even kookier: they also took it a gun shop and tried unsuccessfully to pawn it.

Stupider still, when they entered the pet hospital to steal the lizard, they signed in at the front desk with real name, address, and phone number.
Posted by JSH at 9:21 PM