Death of a Frappuccino 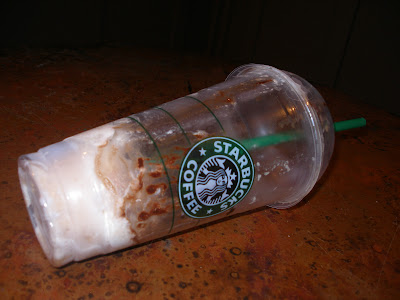 So I went into my usual Starbucks the other day - which lately has become the Starbucks kiosk inside the Target store at the corner of Hubbards Lane and Westport - and got my usual Venti Caramel Frappuccino.

As a longtime connoisseur of the frap, I know every little nuance in its preparation and can instantly discern when something's gone awry in the process. Something here was drastically wrong - it tasted bland and nasty, like skim milk in a colloidal suspension of dishwater. Didn't taste any coffee, didn't even feel like I'd ingested any. The texture was all wrong. The color was pale and wan.

I took it back to complain and the barista apologized, gently breaking it to me that corporate has changed the formula of the frappuccino now in order to make it an all-purpose generic drink that can be more flexible and customizable for those who prefer Soy and such. She actually agreed that the end result of the new formula is a substandard drink, but there's nothing she could do about it.

Supposedly the new fraps are healthier, using real sugar instead of HFCS. As a stalwart opponent of HFCS myself, that's applaudable, but the sweetener is clearly not the whole cause of the problem - it's the lack of the old "base" from which all fraps were made, which is now supplanted by a strictly syrup-squirting regimen. Sorry, y'all, but it's literally undrinkable, and I'm not the only one who thinks so. Angry reports from my fellow disgruntled frappologists are popping up online like dandelions after a Spring rain.

Starbucks launches their new and ostensibly improved Crappuccinos in May, but because they stopped production on the old mix base, many stores are already serving the new formula without even mentioning that a shell-game switch has been pulled. I found another Starbucks in Crescent Hill that is still using the old base, and I will buy from them until they run out... and then, sadly, looks like Starbucks and I are through. I'll have to go to a local competitor's frap imitation. 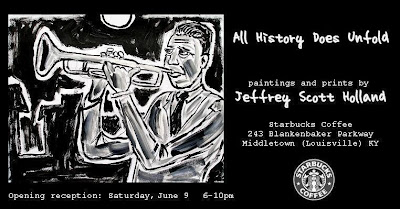 It's a shame, too, because I've always been a very open and very vocal supporter of Starbucks, and I had a solo art exhibition at the Middletown Starbucks a few years back. I've always enjoyed the cognitive dissonance that my pro-Starbucks position instills among the masses of knee-jerk box-dwellers out there.

People always expect a radical hipster bohemian artiste such as myself to take the liberal position that all things corporate and huge are automatically bad. Starbucks has always been a useful tool for me to illustrate to others that if I like a product, I don't give a damn where it came from or whether it's "cool", and that I do not oppose something just because it got big and successful. Things are supposed to get big and successful.

Unfortunately, that doesn't mean that big companies don't sometimes make bad decisions. The people at the top clearly don't drink fraps themselves, or else their tastebuds are shot to hell, because this new formula is strictly riding that train to "New Coke" epic fail. As far as actual coffee-coffee goes, I grind mine fresh at home and use beans from all kinds of companies from Starbucks to Intelligentsia to Red Hot Roasters. The frappuccinos were the whole reason for my visits to Starbucks, and now that I find we've grown apart, I must say buon viaggio, mio fratello.
Posted by JSH at 8:39 AM