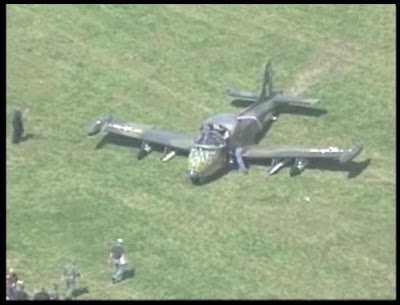 A BAC 167 Strikemaster plane that had been scheduled to perform in tomorrow's Thunder Over Louisville air show had a close call with disaster today.

The vintage fighter plane reportedly slid off the runway at Bowman Field after somehow suffering damage its landing gear while attempting to land. It wasn't immediately evident what caused the incident, but according to the Courier-Journal, their current theory is that "a gust of wind caused it to lose lift on its wings".

The plane, nicknamed "The Dragon", is part of an air-show company called Red Star & The Dragon. The show must go on, so the Red Star will fly solo without its partner, I hear.

Although there's probably no connection with the Bowman Field incident, problems with aircraft seem to be on an uptrend lately. A small plane filled with firearms and ammo intended for a gun show went down in Louisville Fairgrounds a week and a half ago.

Elsewhere in the world, Qantas Airlines has had five engine malfunction incidents in the last 16 days. Just last week, an Australian jet ended up grounded when it was realized it had somehow sustained a cracked cockpit during its previous flight. That, in turn, makes the mind wander to the recent rise in near-Earth meteoric material, and/or space junk, which may or may not have caused the fireball in the sky seen over the Midwest. (And then there's the oft-invoked alleged duck collision excuse, which sounds a lot like a Glomar Response cover story to me.)
Posted by JSH at 4:25 PM