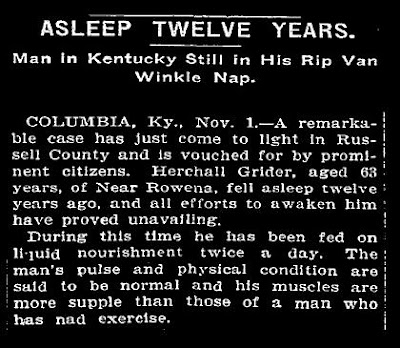 The November 2, 1906 issue of the New York Times features a story about an Adair County man who entered a "Rip Van Winkle nap", sleeping for 12 years and still continuing to slumber at the time of the article's appearance. Herchall Grider, 63, was apparently not in a coma but somewhere between a minimally conscious state and a persistent vegetative state, since he was able to be unconsciously fed by his family without choking. 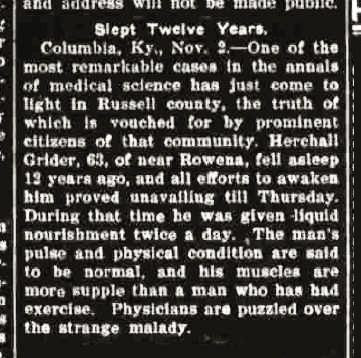 The only other appearance of this story I could find was in the Breckenridge News, Cloverport, KY, Wednesday, November 7, 1906 - oddly, trailing after the New York reporting of it by almost a week. Both stories are similarly worded enough to conclude that one was simply a rewrite of the other - or perhaps both are reworded relayings of a third report elsewhere.
Posted by JSH at 7:57 AM

I wonder what happened - did this guy ever wake up?