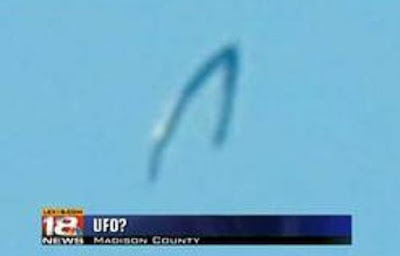 A number of people saw an unidentified flying object over the city of Berea a few days ago. Thanks to the spooky goings-on at the Depot, weird things in the skies aren't that big a deal, but this time one of the puzzled witnesses was none other than Scott Powell, editor of the Berea Citizen.

Powell and his neighbors watched the strange wiggling, undulating UFO for about 10 minutes. Channel 18 News quoted him as saying, "It looked like the Gateway Arch in St. Louis had come up and was flying in the air, because it had that arch shape to it and it was kind of a metallic - it had a shine to it."

As it turned out, the tubular floater wasn't an alien nor a cruise missile and it wasn't even a secret government project. It was merely a giant 50-foot-long solar bag that a local schoolteacher had released into the air as part of a class demonstration of solar energy. Solar bags act like helium balloons (some have risen to over 120,000 feet) but are filled with nothing but ordinary air, heated via convection by the sun's rays.
Posted by JSH at 12:00 AM

Where is the solar bag? Where is the demonstration of it to prove that's what it was? Why do so many people believe whatever they're told?

Well, you could call the Berea school (there's only one) and ask around. Had the object in question looked even remotely like anything but a solar bag, I would have done so myself.

If someone's going to create a bogus story to cover up a UFO incident, the logical thing to do would be to say some local professor released a solar bag for an experiment, and that he/she did it ALONE, without witnesses. No chain of evidence, you see.

But for them to say that an entire class of kids did it, well, that involves witnesses. I really don't think all those schoolchildren are being coerced into participating in a UFO conspiracy.

Demanding demonstrations of proof goes only so far before it paints a person into a very remote corner. I could similarly posit that I don't believe George Washington existed, because no one has ever conclusively proved to me personally that he did. And if someone points to historical references, I can always say "Why do so many people believe whatever they're told?"

As the name of the town implies, as do comments, one needs to verify reports to actually know how accurate they are. A vast majority of the public can but trust what publications may present, especially that journalistic media will be objective and thorough with verifying sources of information. We have to trust that someone that said they were the school teacher that did this actually is who they say they are, and that the children would also say what the "teacher" claims they would say. I find it curious that the school teacher didn't record the event on visual media, but other people did. It doesn't seem the public has been given the visual media that does exist of the object, so that the public could analyze it themselves. The image provided from a video is not clear enough to determine whether the object is round like macaroni or flat like a horseshoe. Perhaps the authorities would say that shadows and light reflecting off the object makes it appear flat, not round as solar bags are.

I am in agreement that people should verify what they can of reports to know the truth, or not, of what they are told.