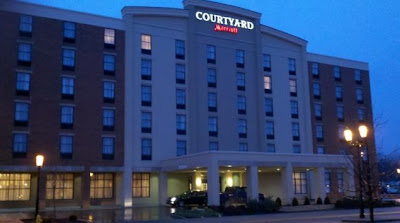 A Kentucky man has been arrested for destroying a Cincinnati hotel room by flooding it with hundreds of gallons of water. From FOX News:

Charles R. Weaver, 46, from Hindman, Kentucky, was arrested at the downtown Cincinnati Courtyard by Marriott.

A police report stated that water was coming out from under the door to Weaver's room and was leaking into rooms next door and into the lobby.

According the report Weaver was found laying in the water naked and he was screaming that someone was trying to set him on fire.

Police also report that they found 24 grams of cocaine wrapped in money, several bottles of alcohol and 1.8 ounces of marijuana in Weaver's room. Weaver apparently admitted that he had been doing drugs over the past couple days.

According to WLEX 18, Weaver originally admitted to using the drugs, but then changed his story and accused the police of planting them in his hotel room.

The damage done to Weaver's room, adjoining rooms, the hallway and the lobby will cost many thousands to repair. Hope this clown still has some money left after buying all those drugs, because he's going to need it.
Posted by JSH at 9:48 AM

Maaaan. this is totally some Fear and Loathing stuff right here!