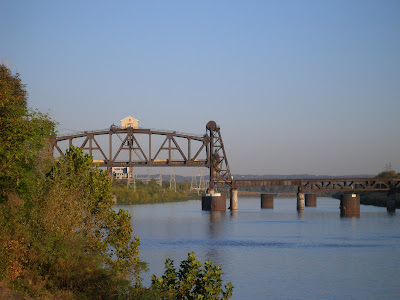 I've always been fascinated with the little building that's perched atop the Fourteenth Street Railroad Bridge just outside of downtown Louisville. I had always thought the bridge abandoned, since I've never noticed any trains crossing it. But reading up on it online just now, I find it's open and doing well under the auspices of the Louisville & Indiana Railroad (whose logo can be clearly seen on the little building). I'd like to venture up there sometime if they'll let me, and take some photos from that vantage point. 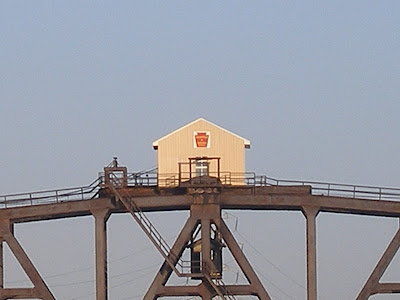 The bridge runs along the beginning of the McAlpine Locks and Dam area. A hydroelectric plant is operated here by the always-controversial utility company LG&E, or should I say E.ON; no wait, I mean PPL. 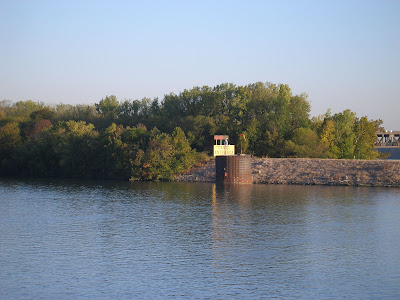 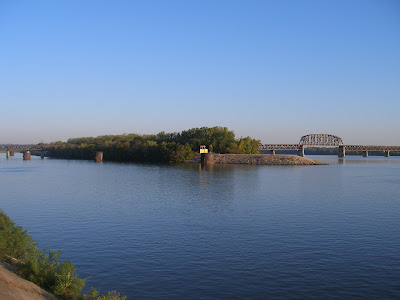 Before being rechristened after William McAlpine in 1960, this was known as the Louisville-Portland Canal since its completion in 1830, and to this day, many people still refer to this area as simply "the canal".

The canal had a convoluted history, which involved costs going way over estimate - due in part to unforeseen difficulties with the solid rock bed near the Falls of the Ohio that needed to dug out completely by workers (including a young Abraham Lincoln, who was part of the construction crew in 1827). President Andrew Jackson refused to give a third injection of government funding to save the project, and it was barely finished with the help of private investors. But by 1855, the government had taken over the canal in a massive buyout.
Posted by JSH at 3:54 PM