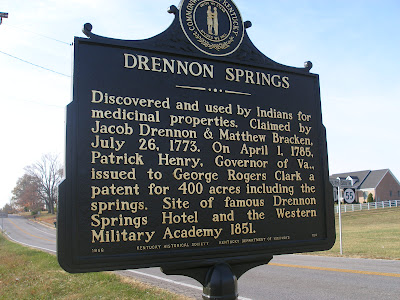 Drennon Springs, KY was founded by George Rogers Clark, who discovered a wild game path leading to a salt lick at the mouth of Licking River and decided to go into salt production right there on the spot. (I like how people just up and did things in those days.)

The area had already been staked out by Matthew Bracken and one Jacob Drennon, but Clark managed to get settlement rights from the state of Virginia (at that time, Kentucky was just a huge county of Virginia, thanks to the illegal Transylvania land grab. In addition to the salt business, Clark also immediately began farming corn there in 1775 and built a huge log fortress which became a popular way-station for fellow travelers.

Unfortuately, it was not so popular with the Native Americans, who captured the station, killing two and kidnapping another. This, combined with dwindling salt production there, pretty much spelled the end of the settlement for a time.

But then in 1817, the reputation of the curative properties of the area's seven sulphorous springs caught the public's attention, and people began traveling from all over the country to be healed by its waters. Suddenly hotels and hospitals began popping up, and exaggerated rumors of the water's power attracted droves of desperate people, including the terminally ill, invalids and disabled people who believed that the waters would enable them to walk again.

In 1849, the fickle finger of fate flicked Drennon Springs once more. The cholera epidemic broke out, and when people learned that even the denizens of the springs were not immune to cholera, its reputation as an all-healing balm went south.

Centuries before Clark, however, tribes of ancient mound-building Native Americans dwelled here. According to a newspaper article in 1832, "Drennon's Lick has bones and mounds." What became of those people, and why did they disappear from here? No one knows. By the time Clark showed up and claimed this land in the name of himself, the property was considered by the Shawnee (as well as three other tribes) to be their own, and Clark wasn't invited.

Nowadays, compared to the national fame and dangerous days of old, not so much goes on at Drennon Springs - but there's the great Smith Berry Vineyard and Winery nearby, and every year the Historic Drennon Springs Festival is held, with storytelling, arts and crafts, historical reenactments and costumes, horseback riding, and bluegrass music.

The Disciples of Christ have had their Drennon Christian Church here for many years, and it also has a long and interesting history. You can see old photos on their site here.
Posted by JSH at 10:38 AM

As I have become a great fan of the mineral springs at West Baden & French Lick, Indiana, I have oft wondered if similar springs existed in Kentucky. Sad that the Drennon Springs are no longer accessible to people!

But I might have deduced other springs would be located further down the ancient Bison Migratory Trail. From Lick to Lick to Lick . . .