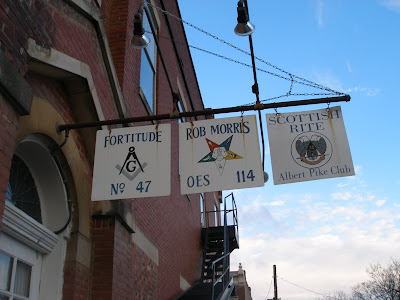 Seen in downtown La Grange: a nice triumvirate of old signage for the Masonic Fortitude Lodge #47, the Scottish Rite Albert Pike Club, and the Rob Morris grand chapter of the Order of the Eastern Star. (The only thing that could make them even more fun is if they were neon.)

La Grange was named after Freemason Marquis de Lafayette, whose wanderings around Kentucky seem to have had quite an influence - one that may be continuing to reverberate to this very day via the so-called "Fayette Factor".
Posted by JSH at 12:01 AM