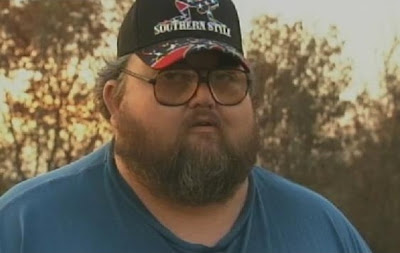 The news media is buzzing like flies today, over the sentencing of the criminals who allegedly assaulted a Lawrenceburg man. According to reports, the man faced gunpoint and knifepoint as the assailants cut his beard off and forced him to eat it.

Apparently, reporter Cathal Kelly of the Toronto Star thinks it's something to make mirth of, with puns like "his hunger for justice". And oddly, though Kelly used this WLEX story as its source, the quotes were altered to reverse WLEX's editorial cleanup of the man's grammar.

WLWT couldn't help punning either, although they were slightly more subtle: "A central Kentucky man said he's waiting for justice to be served after two men shaved his beard, then made him eat it."

(And of course, the kind of people that enjoy sites like Fark won't be disappointed by their coverage.)

The idea of beard-eating is intrinsically humorous, of course, there's no denying it - there's an old Johnny Ryan comic strip that comes to mind - but correct me if I'm way out of line here, assault and violence isn't funny, even if the victim is wearing a Confederate Flag hat. I'm sick to death of media/internet snarkiness that reflexively, as a rule, now feels mandated and obligated to use people's misfortune for bread-and-circuses entertainment.

A few years back, I actually saw a "news" story on local TV about an elderly woman who tripped and fell and injured herself, and waited a long time before anyone found her. These capped-teeth talking heads actually peppered the story with puns like "went on a trip this fall" and actually dared to invoke the monumentally unfunny cliche "Help, I've fallen and can't get up".

I'm all for making fun of criminals, of course - I mercilessly heckle sociopaths from this microscopic podium in the ocean of internet noise. But I oppose "news" stories that make fun of the victim, an act which places the reporters themselves in the sociopath seat, and encourages the audience to slough their civility and come along for the rude ride.
Posted by JSH at 9:13 AM

Amen! Thank you for this refreshing bit of civility in an increasingly barbaric age.

Hear, hear! Do you think common courtesy will ever become common again?