Most serious students of Fortean phenomena and the paranormal are aware of what has become known as the "Fayette Factor".

In the late 1970s, when home computerization first started researchers on the road to properly collating and sharing their own personal paranormal case files, a glaring coincidence became apparent to author William Grimstad. It seemed that an uncanny number of the incidents involved the word/name Fayette, Lafayette, or variations thereof.

In the Spring 1978 issue of Fortean Times magazine, Grimstad wrote an essay on his findings, entitled "Fateful Fayette". Since then, the subject has been expanded upon and expounded upon by many other researchers, most notably by author Loren Coleman.

It appears that, for those who believe such things possible, there is a definite mythic resonance and power around the name Lafayette and its abbreviated version, Fayette.

Some, like the aforementioned Coleman, suggest a connection to Freemasonry and the French Marquis de Lafayette:

The cities, towns, and counties across the United States, which are the Fortean hotspots linked to the Fayette Factor, are tied to the renamed Masonic lodges and affiliated sites that the Marquis de Lafayette visited on his grand tour of the country in 1824-1825. His visits were highly ritualized happenings, in which he is involved with laying many cornerstones. The locations where he is taken to visit are a virtual roadmap of the "special places" in this land. For example, in 1825, The Marquis de Lafayette, on board the ship (please note!) "Enterprise," visited the Cahokia mounds, and the significant Bloody Island, which then was so large that half of the Mississippi flowed east of it. (Intriguingly, Lafayette returned to France in 1825, on the day after his birthday, demonstrating a keen eye on the calendar and a desire to celebrate September 6th in America.)

Others believe the harmonic significance and coincidence-inducing energy around the name Lafayette must go back even further, to something older, prehistoric; antediluvian, even. Such patterns of resonance, reverberating in the woof and warp of the timespace continuum, like Rupert Sheldrake's Morphic fields, if they exist (and I have seen convincing evidence that they do) may predate man entirely.

Since one of Kentucky's most prominent counties is Fayette County, it's not surprising that the Lexington Herald-Leader eventually got hip to the concept. On March 14, 2004, that paper had a feature article about the events of the previous day (which is March 13, same day as today, in case you haven't noticed, and no, I did not plan it thus):

It was already notable for being a Friday the 13th. But some saw more in the Adams Lane shootings that day. Two days before the shootings, Ufoinfo.com, a Web site devoted to the paranormal, republished a tract about "the Fayette factor"...

Should we be surprised in a year in which a sniper haunts the Fayette County, Ohio interstate, or Lafayette, Louisiana's St. Paul School Social Sciences Fair had juniors Chris Brown and Robert Egnatchik placing first in anthropology with "Bigfoot" that the whole Fayette Factor would be getting
conscious press attention?

Subscribers to the Marquis theory also find significance in the name "LaGrange", and rightly so: Kentucky's own city of La Grange is named for Chateau de LaGrange, which was the French home of the Marquis de Lafayette. And our La Grange does have a powerful mojo about it, perhaps in part because of the maximum security prisons there. And it is true that the place is the burial site of the poet laureate of Freemasonry. (Then again, at this late date in history, in any given town, throw a rock and you'll probably hit something Freemason-related.)

Fayette County is well known as a paranormal hot spot, with haunted sites galore and a compelling folklore about a series of enormous underground caverns. Reportedly, these subterranean chambers once held the remains of a mysterious civilization that long predated the Native American tribes that occupied America when the pilgrims showed up. Fayette County is also home to the haunted Hunt-Morgan House, and it's the place where I had my Men In Black experience. 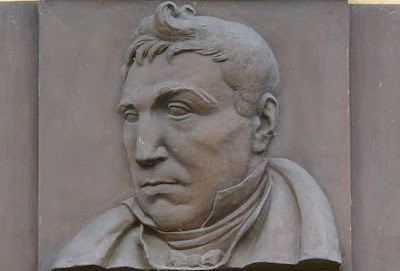 What does it all mean? I'm pondering.

The image above is the Marquis de Lafayette, at his memorial site at Olomouc.
Posted by JSH at 11:44 AM

Marquis de Lafayette came through Middletown (among other places) during his 1824-25 visit to the States, and it is rumored that he lost a very valuable signet ring at the old Davis Tavern there (now called the Wetherby House, which serves as Middletown's City Hall).

My grandmother's best friend (met as children and were friends until my grandmother passed away in 2000)lives in a house up on Catnip Hill that was built specifically for Lafayette's visit. It has a dining room that is built in the shape of an octagon. She also owns Belle Brezing's actual bed. Sadly, her life has been full what can only be described as tragedy.