Thousands Turn Out For Mennonite Funeral 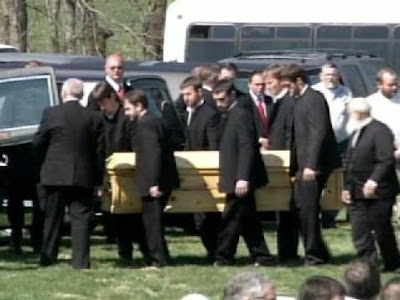 Last week, eleven Mennonites on their way to a wedding in Iowa were killed when a tractor-trailer crossed over the median and crashed into their van on I-65 in Munfordville, KY. Two children survived the crash.

Yesterday, funerals were held in Cumberland County for nine of the victims and there was an unprecedented outpouring of support from the public - thousands of citizens descended on the tiny town of Marrowbone to honor the Esh family in their time of tremendous loss. At least 4000 people attended the services, and some drove more than 1000 miles to get there.

Kenneth Laymon, the truck driver killed in the crash, will be laid to rest Wednesday morning in his home state of Alabama. Authorities, who still dont know why Laymon's truck crossed the median into opposing traffic, are still analyzing the results of the autopsy to determine if drugs or alcohol played a part.
Posted by JSH at 12:01 AM