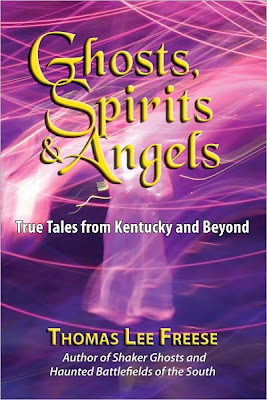 It's been out for a few months now, but I've just become aware of a book called Ghosts, Spirits and Angels: True Tales from Kentucky & Beyond, that looks to be a real pip. I learned about it from a post made on the Phantoms and Monsters blog.

Author Thomas L. Freese (any relation to Claude H. Freese, I wonder?) is an author and storyteller whose work includes over 130 articles for magazines and newspapers such as Lexington's Chevy Chaser. His other books include Shaker Ghost Stories from Pleasant Hill, KY, Fog Swirler and 11 Other Ghost Stories, and Strange and Wonderful Things.

I know I've met Mr. Freese but I can't remember where. Some of my synapses suggest it was at the St. James Art Fair but other voices in my noggin say it may have been at a Farmer's Market in Shelbyville. My fractal memory's too fractal to pull it up right now, but I do recall he was a really sincere and nice guy.

Here's the Barnes & Noble synopsis about his new book:

Ghosts, Spirits and Angels, presenting compelling true tales and eye-witness accounts from over 75 individuals with stories set in Kentucky, plus a dozen other states and two countries! This unique panorama of paranormal and spiritual incidences is laid out by ordinary folks who happen to live in haunted houses, come up to the edge of spiritual realities and are blest to encounter angels.

Ghosts, Spirits and Angels makes a dramatic statement in spreading the net wider than just ghostly tales to bring in true accounts of the simply amazing. Lives are forever changed by these encounters in such stories as a dead friend saving a would-be author from throwing away her first book manuscript, a Kentucky girl who grows up with a witch who married into their family, angel wings that caught a skier who fell off a cliff, and the arrival of a cash-filled envelope addressed by someone's deceased mother postmarked after her death. There are also tales of shadow people from very haunted Waverly Hills TB Sanatorium, an account of Tennessee's Bell Witch, a humorous tale of a family's ghost cat, and the touching story of an angelic emergency responder, to name a few.

Hey, I've got my own true Kentucky ghost story up on youtube at