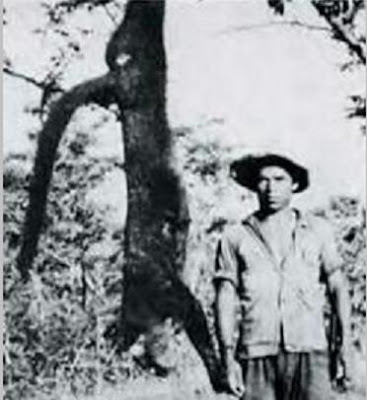 There have been many reported sightings of so-called "black panthers" in Kentucky (and other states as well) despite the fact that they aren't supposed to be here. "Panther" is a generic term that refers to any number of large black cats in general, and if there really are black ones in our state, they are most likely rare melanistic colour mutation of any number of species.

"There are no authenticated cases of truly melanistic cougars (pumas). Melanistic cougars have never been photographed or shot in the wild and none has ever been bred. There is wide consensus among breeders and biologists that the animal does not exist."

However, it then immediately goes on to state:

"Black cougars have been reported in Kentucky and in the Carolinas."

The photo above is one such example.

On the other hand, black Bobcats, while also rare, are acknowledged to exist, and although they technically do not qualify as panthers, I don't think the average person who spots one is going to care about the finer distinctions.
Posted by JSH at 11:19 PM

There's a solid black cat that comes here to eat scraps that we throw in the yard that is almost the size of a small dog. A couple of times, I thought it was a dog.

My Grandmother lived and worked in Mammoth Cave National Park for years and she told me of her brothers seeing a "big black cat" that screamed at them like a woman. Might this be a black puma???

Funny thing is how people say Pumas, Pathers and Cougars are the same. But there are black whatever cats despite people saying the don't exist. Generally Pathers are spotted kinda like Chetahs and black panthers do have spots, you'd see them if you were brave enough to get close. They typically come out at night so it's beneficial.

I remember 2008 holloween I used to hear on the Max a woman told the story of a large black cat around Waverly with I think orange eyes that would watch people by he golfcourse.

I am from Somerset,KY and I have heard several people discuss "panthers" being around.