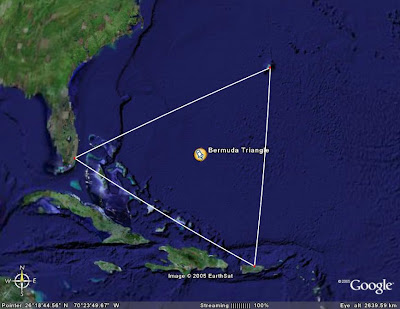 And hey, speaking of the so-called Bermuda Triangle of the Ohio (which we were yesterday) were you aware that University of Louisville basketball star Derek Smith was in the Bermuda Triangle shortly before his unexpected death in 1996?

Smith was aboard a luxury cruise liner called the Dreamward (since renamed the Norwegian Dream) on a trip to Bermuda - which in itself comprises one of the points of the triangle - and he began feeling anxious and ill on the journey. He wore a scopolamine patch behind each ear to help ward off seasickness and nausea. It was on the return trip that he abruptly died without warning.

According to the New York Daily News:

The night of Aug. 9, during a cocktail party aboard the Dreamward, Smith was his normal self. Smiling. Laughing. Animated in conversation as he autographed basketballs for about 100 vacationers. As always, he was eager to join his wife, Monica, their 9-year-old daughter, Sydney, and 5-year-old son, Nolan. At 8:30 Monica Smith left the observatory lounge with her children and went downstairs to take their seats for the farewell dinner.

Five minutes later, Smith was seated upstairs in the lounge, chatting with several people. Suddenly, his eyes narrowed, opened and then closed. His head moved back. "C'mon Derek, quit messin' around," someone said. Smith's body slumped to the right. Another passenger ran over, found a very faint pulse and started administering CPR. Ship medical personnel rushed in and spent the better part of a half hour trying to resuscitate him.

Despite their efforts to jump-start Smith's heart, it never produced more than five beats in succession.

Interestingly, another death cited as a possible Bermuda Triangle case is that of a man named Derrick Smith, who vanished off the coast of Savannah in 2001.
Posted by JSH at 10:50 PM