Frankfort Cemetery Desecrates Its Own Graves 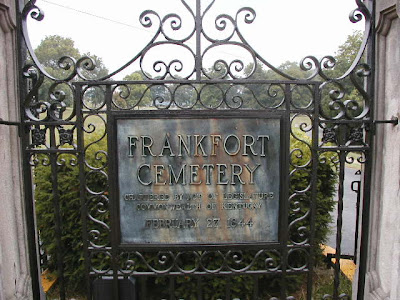 Many families with loved ones buried at Frankfort Cemetery were recently horrified to find that trinkets, mementos, sentimental items, crosses, religious icons, and plastic flowers have all been removed and tossed in a giant junk heap.

Superintendent Coleman Kincaid is the man responsible for this travesty, and he makes no apologies about what he's done.

"There are so many ways that objects near and around graves make it hard for us to do the maintenance that this cemetery requires. We have 20,000 graves here." Kincaid said to the State-Journal. "The rules have always been here. It’s just in the past they were loosely observed and I am the one now charged with enforcing them."

However, there are glaring problems with Kincaid's "rules are rules" excuse. For one, real flowers are permitted while plastic ones are not, so it doesn't make sense to say that it's just about the maintenance men having difficulty mowing and weed-eating. It's just as hard to mow around a real flower than a plastic one.

Let's just be honest here, Mr. Kincaid, and say what this is really about: aesthetics. Even in death, it seems, snooty and nosey people try to tell tackier people what they can't do in their own yard.

Some people think decorated graves are tacky, while others (like me) say that people who paid a fortune for an exorbitantly price-gouged funeral, headstone and cemetery plot should be able to leave trinkets at that grave without some Mrs. Drysdale-voiced society lady complaining about how gauche it is.

I don't know whether Cemetery Board Member Dorothy Wilson talks like Mrs. Drysdale, but it would be appropriate. From the State-Journal:

“I think Coleman and the men who work here have done a nice job and definitely think it looks better,” Wilson said.

She too has received complaints, and many who called were very angry, she said.

“We (the board) began discussing the condition of the cemetery two or three years ago and the fact that there was a policy and it is on every contract, but had not been enforced,” said Wilson, the board member.

“When Coleman came on as superintendent last summer, we explained to him that the cemetery needed to be cleaned up.”

Although it may be true that stipulations about trinkets on graves are indeed buried deep in the fine print of the cemetery's contract (and who reads such contracts closely when they're wracked with grief for a loved one?), Wilson has, by her own admission, acknowledged that the policy had not been enforced. This means that a prospective customer, looking around and seeing graves festooned with bric-a-brac, naturally and logically would assume such things were permitted - because, in fact, they were.

The Frankfort Cemetery Board - consisting of seven people selected every five years - needs to overcome their obsession with aesthetically "cleaning up" other people's graves. The State-Journal notes that many people are furious with the Board, and say those who sit on the board are insensitive to their grief.

But that's not the only problem on their hands.

In someone's zeal to "clean up" the place, actual grave markers have been removed from the baby section of the cemetery. From the State-Journal again:

Pat Woods, of Frankfort, is among those upset by the policy.

“They even removed things that were sitting on tombstones and just threw them in a pile,” Woods said. “What respect have they shown for us or our loved ones?”

Woods is especially distraught that markers are gone in a section many refer to as the baby cemetery. “When my brother and sister died in the 40s, my parents could not afford tombstones,” Woods said. “I recently purchased new markers and replaced the old ones. They are gone.” A wooden cross that marked one child’s grave is no longer there, she added.

I got literally sick at my stomach when I read this. How dare they disrespect these families so blatantly. I want to find these people and smack them upside the head.