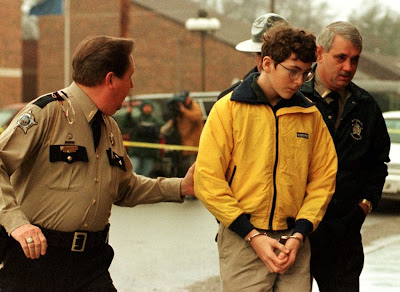 In 1997, a 14-year-old Paducah boy named Michael Carneal, endlessly tormented by school bullies and increasingly hearing voices in his head of a group of entities calling themselves The Danes, finally snapped.

On December 1 of that year, he brought a .38 handgun to school and opened fire upon the school's Christian prayer group, killing three and wounding five more. He then placed his pistol on the ground and said, "Kill me, please". He had been reading the Stephen King novel Rage which, coincidentally, was also in the possession of Dustin L. Pierce, a senior at Jackson County High School in McKee, who held his classroom hostage at gunpoint in a nine-hour police standoff in 1989.

Despite the fact that he was only a child, he was sentenced to life in prison in LaGrange.

Now, probably out of boredom being in a high security institution surrounded by far scarier people than himself, Carneal has turned to art as an outlet. People are actually purchasing his artwork, which inevitably draws the ire of people who don't want prisoners to be able to do anything, have anything, achieve anything.

It all started years ago when killer clown John Wayne Gacy started getting rich in prison selling his crude paintings, and someone decided that maybe it wasnt such a good idea for murderers to profit from their crimes. When you phrase it that way, it does sound logical, but on the other hand, there isn't much "profit" involved when you're in prison for life and all you can really buy with your windfall is stale, overpriced Reese's Cups at the prison commissary. I mean, the guy's in jail for life, it's not like he's living the life of Riley in the VIP room of a Monte Carlo casino.

It's also part of a growing trend to dehumanize prisoners, and to take away any shred of a reason to live for these people. Sooner or later, the same people who say "prisoners shouldn't be able to sell their art" will be saying "you know, prisoners shouldn't be allowed to watch TV or read books either. They committed horrible crimes, so they don't deserve to do anything enjoyable ever again." This mindset that prisons are supposed to be hellish only guarantees that these men and women will only become hardened sociopaths more than ever. No wonder recidivism rates are through the roof.

An organization called "Kentuckians Voice for Crime Victims" (do they have a website? I couldn't find one) has publicly decried the sales of Carneal's artwork and writings, even though Carneal is not actually directly receiving any cash from these transactions. The Courier-Journal devotes a disproportionate amount of a recent article to the opinions of some anti-prisoner-trade activist named Andy Kahan from Texas. According to the article, "Kahan estimates that about half of the criminals get some form of payment, but he argues it's just as wrong for third-party dealers to profit."

By this logic, no one would be allowed to write true-crime novels or even cover the news for profit.

Having said that, the websites offering Carneal's work - such as Ghouls Like Us, Serial Killers Ink, and Murder Auction - don't really seem like serious patrons of the arts. Rather, they seem like a bunch of unhealthy serial-killer fetishists who might need to be checked for Danes themselves.

(As a cigar enthusiast, though, I have to admit that my curiosity perked up just a tad when I learned that Ghouls Like Us is selling a cigar butt from another infamous Kentuckian, Charles Manson, and hyping it by saying "now you can say you've shared a cigar with Manson!")
Posted by JSH at 12:09 PM

Hellish is not what prisons should be. A place of reform and rehabilitation, is however a good idea. I think to diminish some creature comforts, especially ones that lead to inactivity or non-productiveness, would not be a bad idea. Also, I know this is crazy, but there is a part of me that thinks if it could be done in a non-oppressive way, that prisons should go back to being a place of production, like the old license plate stereotype. One way to get jobs back into the state. Are there any Kentucky prisons that still have the prisoners work?