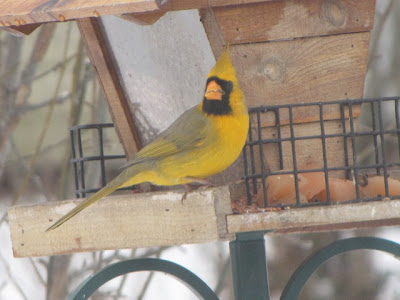 A pair of extremely rare yellow Cardinals showed up at a Kentucky family's backyard bird feeder a few weeks ago, and it's rocking the world of ornithology.

According to the Herald-Leader, retired Kentucky Nature Preserves researcher Brainard Palmer-Ball and Auburn University professor Geoff Hill have examined the photographs and confirmed that these Cardinals are indeed the result of a genetic mutation, rather than being the yellow South American Cardinal, which is an altogether different species from our Northern Cardinal.

If you see a yellow bird outside, don't hesitate: take pictures! Don't stop to gawk and ask yourself whether it's a goldfinch or not, snap pics and ask questions later.

These specimens were sighted near the Boyle County/Marion County border, not far from Gravel Switch.
Posted by JSH at 11:40 PM

I saw a big yellow bird last summer in louisville, and it was golden like this, not bright yellow like a pet store bird. I will keep my eyes open now!