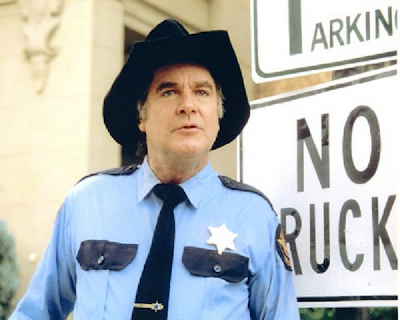 You probably know James Best as the man who played Sheriff Rosco P. Coltrane on The Dukes of Hazzard, or perhaps as Jim Lindsey on The Andy Griffith Show , but he's actually had a long and checkered career in the world of film - he was in The Caine Mutiny with Humphrey Bogart (1954), Seven Angry Men (1955), Forbidden Planet with Anne Francis and Leslie Nielsen (1956), Cole Younger, Gunfighter (1958), The Naked and the Dead (1958), Ride Lonesome with Randolph Scott and Lee Van Cleef (1959), Three on a Couch (1966), Firecreek with Jimmy Stewart (1968), Ode to Billy Joe (1976) and Hooper with Burt Reynolds and Adam West (1978).

(But me, archivist of moldy old b-movies that I am, I know him best as the star of 1959's The Killer Shrews with Ken Curtis!)

He's also made over 280 TV show appearances including The DuPont Show with June Allyson, The Adventures of Kit Carson, Frontier, Sheriff of Cochise, Pony Express, Stories of the Century, Behind Closed Doors, Bonanza, Gunsmoke, Have Gun – Will Travel,Trackdown, The Barbara Stanwyck Show, Tombstone Territory, Whispering Smith, The Twilight Zone, Overland Trail, Alfred Hitchcock Presents, The Man and the Challenge, Combat, The Mod Squad, I Spy, Perry Mason, The Incredible Hulk, The Fugitive, Stagecoach West, and In the Heat of the Night.

And, as you've probably figured out if you've read this far, Mr. Best is a good Kentucky boy! He was born and raised in Powderly, a small town in Muhlenberg County, and his uncle was none other than Ike Everly, the country music bandleader who spawned the Everly Brothers. An even more surprising branch in the family tree, Best is the father-in-law of Michael Damian. 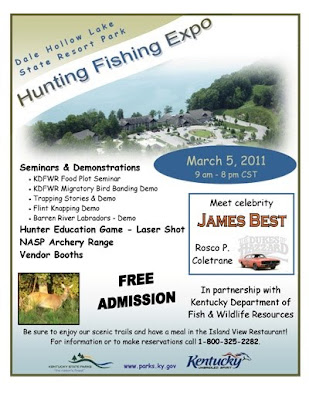 James Best will be back in his native Kentucky TODAY, March 5th, at the >Dale Hollow Lake Hunting and Fishing Expo. It starts at 9am and runs till 8pm, admission is FREE, and special lodge room rates for the weekend are only 50 smackers. Call 1-800-325-2282 for more information, and tell 'em I sent you by!
Posted by JSH at 12:00 AM

Glad to see James Best is still around...he is a good guy.

I enjoyed the episodes of The Twilight Zone that he was on especially the one that was like an old folk tale where a witch is trying to win his affections from the town's good girl that he is dating.

It seems that there's another one like that where he comes back from the dead and the townsfolk want to lynch him and his girlfriend because they think he's demon possessed. Kind of a folksy Americanaesque version of Finnegan's Wake.

The western one he's in is still pretty good, but not my favorite of the three Twilight Zone episodes that I've seen James Best in.