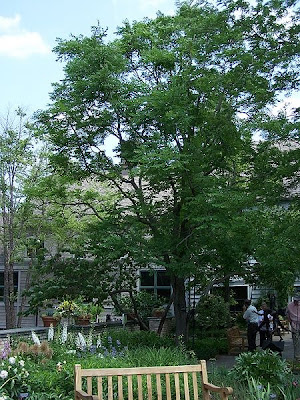 Some of you may think of the coffeehouse in Frankfort when you hear the name, but the Kentucky Coffeetree was briefly our state tree, from 1976 to 1994.

It had originally been the Tulip Poplar, but in 1976 it was discovered that this had never officially been made legal in the Kentucky statutes. Rather than simply make a quiet adjustment to the statutes, the lawmakers felt the thing to do was to totally reopen the issue all over again. Louisville Courier-Journal writer Joe Creason campaigned hard to have the Kentucky Coffeetree appointed our new state tree, and soon he had the masses riled up behind him supporting this change. (Ironically, some say that Creason had originally intended his campaign as a joke, but when the public rallied behind it, he went along with it.)

Early European frontiersmen exploring Kentucky, having run out of coffee, would resort to roasting and grinding the beans of this tree as a (very poor) substitute for their java jones. George Washington was fond of the tree, and mentioned it in his writings. George Rogers Clark gave seeds to Thomas Jefferson, and the resultant trees can still be found on the lawn of Jefferson's Monticello today.

There are only two other species in the genus Gymnocladus, both of which are native to China, which makes me wonder - how came it to these shores? (The idea that Chinese explorers made it to North America long before Columbus is one that's gaining currency.) 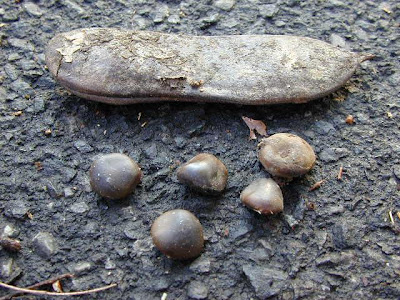 This helpful site shows you in copious detail what the Kentucky Coffeetree and its seed pods look like. I can't condone anyone actually trying to make coffee from these seeds, because it just isn't safe. Like Cashews, the seeds are poisonous in their regular state and must be baked or roasted for at least three hours at 300 degrees.

Regarding its distribution, Wikipedia says: "Widely dispersed, but rare. The Kentucky Coffeetree, Gymnocladus dioicus, is considered a rare tree species. "Rare species are those that are so uncommon that they should be monitored to determine whether their populations are becoming threatened". Meanwhile, the Arbor Day Foundation says: "Resistant to disease and able to adapt to a wide variety of soils and climates, the Kentucky Coffeetree is an excellent choice for parks and golf courses. It is also widely used as an ornamental and street tree". Which begs the question, how has it become borderline-endangered if it's so hardy and easily adaptable?
Posted by JSH at 3:48 PM

Any idea why it was changed back to the Tulip Poplar?

1) (Same as prior commenter) Why was it changed back to Tulip Poplar? I remember in elementary school being taught that it was the Kentucky Coffeetree.

2) I need a replacement tree at home. Wonder where I can get a seedling?

It is a great tree. The reason it is not popular is that when it is young it looks like a stick...for a long time, just a stick. What look like branches on a young tree are actually large compound leaves that it drops in winter, leaving a plain stick of a trunk. Once you know what they look like, they're easy to pick out in winter especially. When they develop real branches, the branches are very blunt.
I have a beautiful female tree (only females have pods) in Illinois. It took awhile to find one 13 years ago. The nurseries all said it was a great tree, but they didn't stock them because people wouldn't buy them if they'd see them next to a full-looking maple the same age. I was excited when I finally found one, especially one old enough to have pods. Now for the last couple of years they've been planted all over Chicago and its suburbs, especially as parkway trees. Coffeetrees have no known pests or diseases at a time when other trees are falling to the Emerald Ash Borer and Long-horned Spotted Beetle. These trees are well worth the wait to see them in their full-grown beauty. They do grow fairly quickly too.