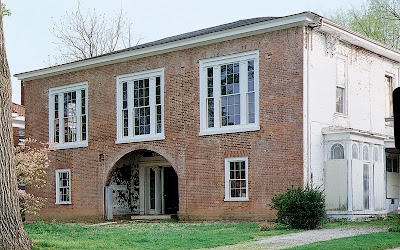 Benjamin Henry Latrobe is considered "the Father of American Architecture" in many circles, and perhaps rightly so: he's the brain behind the design of the U.S. Capitol, the Baltimore Basilica, and the U.S. Custom House of New Orleans. Many buildings in Lafayette Square were designed by him, including even portions of the White House.

This being the case, you'd think people would have striven to preserve his residential buildings as well, but no. Of the many homes created by Latrobe, only three remain standing today.

Lexington's Pope Villa (326 Grosvenor Avenue) is best of the three by far by virtue of its peculiar - some have even called it avant-garde - design. According to its official website: "Its plan is unique in American residential architecture: a perfect square, with a domed, circular rotunda in the center of the second story. Latrobe drew inspiration from 16th century Italian architect Andrea Palladio, but unlike Palladio’s villas, the cubic mass of the Pope Villa conceals within itself a surprising sequence of rectilinear and curvilinear rooms, dramatically splashed with light and shadow. Latrobe called these interior effects “scenery”."

Pope Villa's making a big comeback, with plans underway for a full restoration to its old-timey glory, thanks to the still-surviving blueprints found in the Library of Congress. The image above shows Pope Villa as it currently appears, and the image below shows it more as it looked during its heyday. The home was originally designed for Senator John Pope and his wife Eliza. 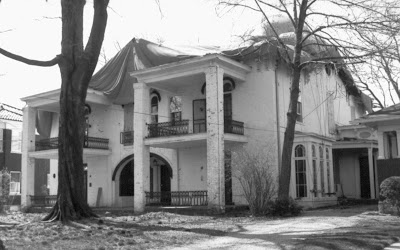 The photo at top actually shows the Pope Villa in its original form -- architectural excavation and drawings have led to the restoration of the facade to its original state.

The second photo you show is actually the Pope Villa after many renovations and add-ons.

I like its appearance with the balconies and the more ornate facade better, and just assumed it was closer to the original plan in the older photo since it was more rococo and plantationesque.

I also assumed the later picture showed it in a state of uncompleted restoration, since the little protruding conservatory-sunroom whatchamacallit is boarded up.