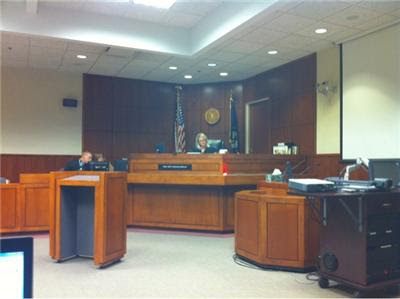 It would have been nice if Louisville Judge Judith McDonald-Burkman could have kept her mouth shut and simply sentenced child-murderer Cecil New II to a well-deserved sentence of either life in prison or the death penalty. Unfortunately, she seems to have looked to television's Judge Judy as a role model, and apparently believes her position entitles her to be as irrational and hateful as her whims dictate.

To the astonishment of many, Judge Judith announced that she was giving New a sentence of life imprisonment deliberately, so that he would be forcibly subjected to "prison justice" at the hands of his fellow inmates, as opposed to the relative safety of the isolation that comes with Death Row.

With glee, the Judge told New she chose life imprisonment for him specifically because he will be among "bigger, meaner men who have nothing to lose, or who are armed."

That's all well and good - I mean, New is a scumbag and my own personal views on justice have more to do with the Wild Wild West than modern jurisprudence - but there's just one problem. Even though everyone jokes about "soap on a rope" and "sharing a cell with Bubba", there technically is not supposed to be such a thing as "prison justice". By deliberately using the threat of being assaulted by fellow prisoners as a sentence, she is basically admitting that such things happen in Kentucky's prisons and that's it's just fine with her.

I can see it now, some thug with tattoos all over his neck kills a fellow inmate and then pleads, "duh, that Judge I saw on the teevee acted like it was a normal part of prison life."

To condone prison violence, and to use it for her own ends, makes this Judge nearly as sadistic, barbaric and inhuman as the psychopath she is sentencing.
Posted by JSH at 2:21 PM

Just from reading your commentary, I thought you were going overboard..... But I read the Courier story and watched the video and I'm startiing to agree.... If she wants him to get beaten and killed in prison, she doesnt have to crow about it for everyone to know about.

I know, right? The Kentucky Department of Corrections, whose reputation is already lower than whale droppings, doesn't need some shrewish Judge admitting that violence is commonplace in our prisons, and that she actually endorses it.

This isn't to be interpreted as sympathy for New, of course. Rather than waste state money on feeding this psycho for the rest of his life, I say just strap him down in Old Sparky right now and fry him like yesterday's bacon. But that's not the issue here.

if this judge is right, and eddyville prison is in a state of anarchy, and armed prisoners get to dole out "justice" as they see it and prison guards are powerless to stop it, then the state needs to demands its money back because the prison is OBVIOUSLY NOT DOING ITS JOB. i dont want my tax dollars going to fund such bullshit.